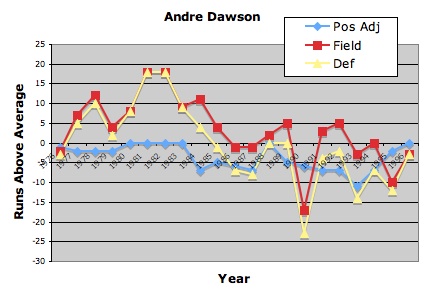 Andre Dawson had two parts to his career.  He started as a very good defender and then became a liability.  Not only do his fielding ratings relative to position decrease over his career, but he was moved from center to a corner spot in 1994, bringing his overall defensive value down in two ways.

In case it's not clear, yellow is his overall defensive value, red is his TotalZone (plus arm) rating relative to the position he played, and blue is the position adjustment (higher means more difficult).