Criteria for winning the MVP award can change between person to person. Some look for the best overall performance, regardless of team record. Others like to take into account how the team performed in relation to the individual season of the player. I tend to treat the MVP award based on best individual performance, so keep that in mind with today's post.

In 2000, which player was worth the most in the National League? That's the question that I'm hoping to answer in today's post using our handy player value graphs. I've taken the top five NL MVP finishers and ranked them by the total amount of runs they've created. 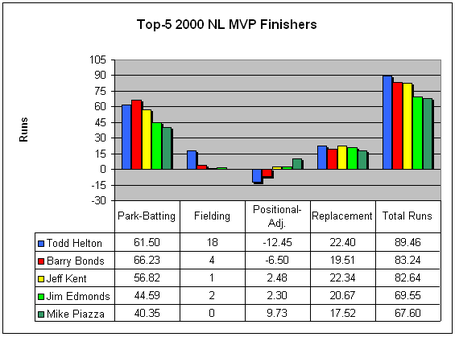 Here's a table ranking of other players in the NL for 2000 that had outstanding years:

You could make a pretty good argument for any of the top three for the 2000 NL MVP Award. Todd Helton, Barry Bonds, and Jeff Kent were all deserving. It's pretty amazing that the 2000 Giants team had two legitimate MVP candidates playing on the same roster. In the end, the voters just couldn't get past Todd Helton playing in Coors Field, he should have placed much better than 5th overall.