Cuba faces Japan in another re-match of the 2006 World Baseball Classic final.  This time, the loser goes home but the winner only qualifies for the semi-finals.

In Cuba's last game, they eliminated Mexico behind veteran pitchers Norge Vera and Pedro Luis Lazo.  Vera and Lazo may be familiar to some baseball fans, and hopefully that number has grown in the past few days. Neither Lazo nor Vera are strangers to big stages, so their solid response to elimination pressure was no surprise.

Surprises are actually typical with Vera and Lazo - in terms of their stuff.  They'll change speeds, arm angles and generally befuddle their opponents.  Neither has overpowering stuff anymore, but they still can dial it up and take care of business.

Their shared victory in San Diego was their first in a PITCHf/x park.  Between yesterday's performance, and this new detailed record, we can further appreciate these two legends of Cuban baseball.

In a near 50/50 split in effort, Lazo and Vera put up similar lines.

They're both cagey vets, tough to characterize.  I'll start with Lazo, who came on in relief and earned a 13 out save.  That's like five saves for K-Rod.

Lazo is pretty consistent with his release points - relative to Vera.  He did come a little overhand on a couple sliders, and did get up on top of his fastball from time to time.  On his secondary pitches (including a variety of change-ups, I think), he tended to drop down a little lower.  This difference is reflected nicely in the aggregated release points (inset shows the detail; click all images to enlarge): 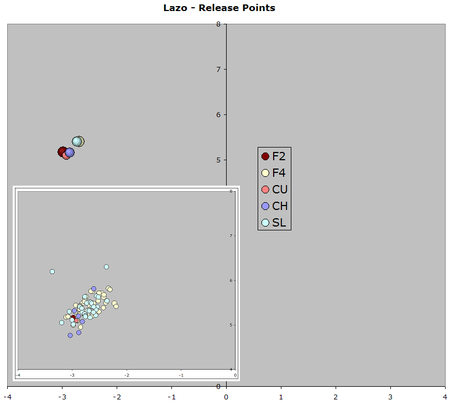 Lazo's array of pitches vary in spin, velocity and arm angle.  Roughly speaking, he throws a four-seam fastball in the low 90s, sitting just around 90/91.  The one two-seam sinker was just under 90, the sliders averaged around 81/82 and the change-up was, or the change-ups were, a big jump down from the heat - averaging less than 80 mph.  The curveball is more of an euphus pitch, I have no idea what that 57 mph floater was.

Let me show you what I mean. 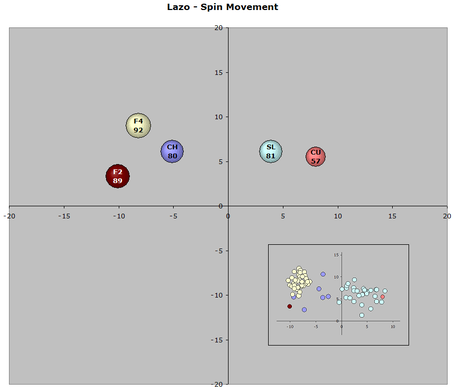 The curveball hangs out with the sliders, the extreme ones, but is substantially slower.  BTW, the two sliders that came from over-the-top are the two lowest in the bunch.  See what I meant about the change-ups? Funky.

Let's flight those out - first the whole lot, and then by primary/secondary.  The latter split happens to be right along the release point split, too.  There are just 8 total change/curve/sinker and 72 slider/four-seam. 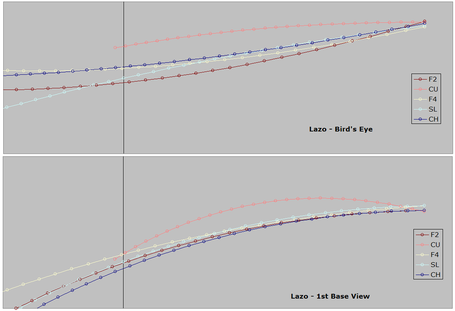 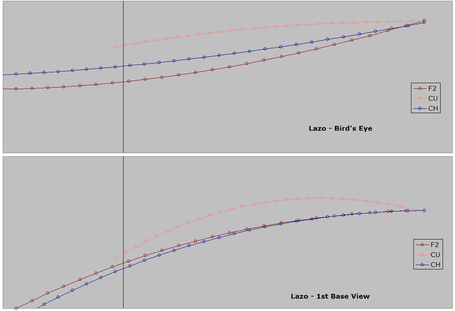 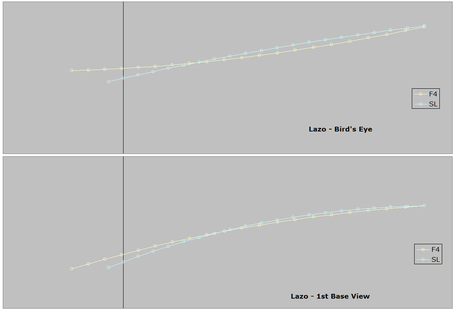 I shortened the flights on the last graph, that "curve" really stretches out the clock.  You can see one of the reasons Lazo is so tough - the planes of his primary pair of pitches are pretty much on par with each other (PPPPPMPWEO, for short).  Same applies for the non-freak secondary pitches.

Like Lazo, Norge Vera relies on two pitches, or so it seems.  A 89 mph two-seam fastball is backed by an 80 mph slider.  Combined, they accounted for 54 of the 74 pitches thrown by Vera.

The remaining 20 come from a bunch of four-seamers, a large handful of change-ups and three "curveballs".  I'm a little more certain about that tag with Vera than with Lazo, but, well, the pictures will show you well enough: 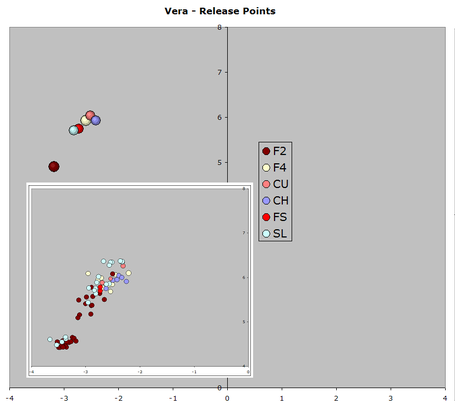 Notice the distinct split - the shift and drop indicate something more than sliding towards one side of the rubber.  Vera's secondary pitches all come from the top slot, but the primaries are split. 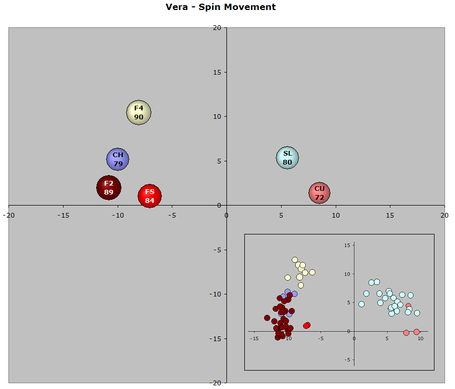 So, you get a curve hanging out with the slider(s).  Same speed as the other two, but, again, who knows.  You can see the four-seamers are tight, the "splitters" (I'm not sure about that tag, either) are on top of each other, but the two-seamer looks like two different pitches.  Remember the release points? The two clusters of two-seamers correspond to that very same split.  The sliders also group, as you'll see below.

Flighting out his stuff will help - I'll start with the full lot.  From there, you'll see the primary pitches split by release point. 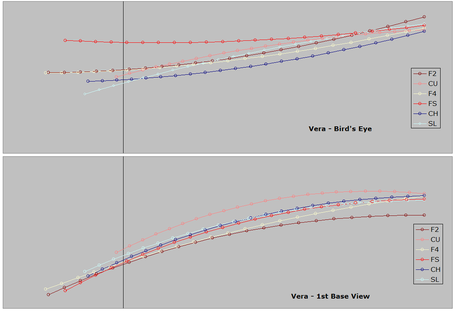 OK, that's not too helpful, as it doesn't split up the arm angles by pitch and, well, that's a lot of lines and dots.

Here are just the sinker and slider.  The dotted lines/empty bubbles are the "low arm angle" and the solid/filled are the "high arm angle".  You've really got more than two arm slots going, but let's try and get through this. 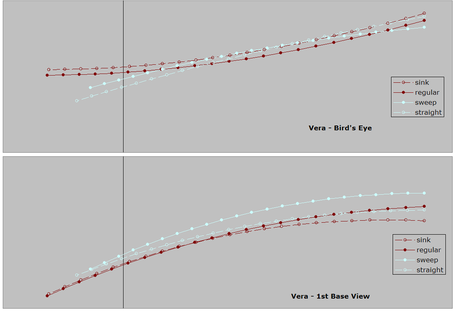 The low slot pitches are "sink" and "straight" - when Vera drops down, the two-seamer sinks even more than normal, but the slider flattens out.  "Regular" is still a sinking fastball, but "sweep" is a more nasty slider, IMO.  It seems to have more sink and slide.

Another look is isolating the release point, and comparing the two pitch types.

Starting with the higher slot: 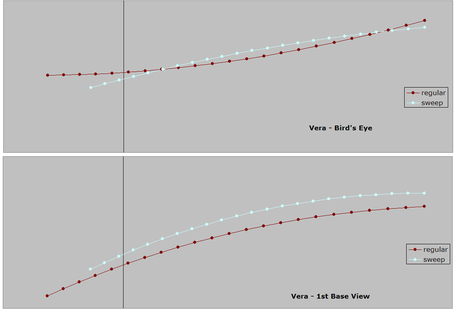 And now the lower: 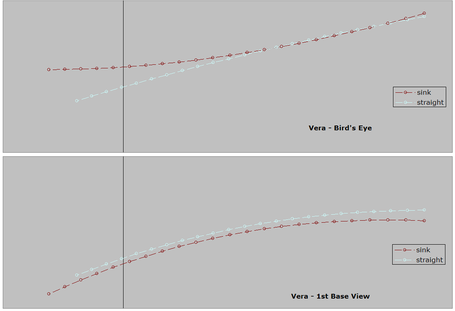 The straighter slider does benefit quite a bit from the plane - while he's dropping down more, on average, with the sinker, I suspect the slider is actually harder to pick-up from this angle.

Hopefully we'll get some more data on Vera and Lazo in the semi-finals, but Cuba will have to get past Japan first - and without their help.