Yu Darvish took the bump for Team Japan on Tuesday night, a much anticipated appearance by the phenomenal young pitcher.  Darvish had some trouble with his location early, gave up  three runs, but ended up settling in for a solid five innings, striking out seven while walking just one member of Team Korea.

The first thing I noticed was how easy Darvish's delivery looked, and how the ball just exploded out of his hand.  I only saw him throw what looked like four-seamers, but I think I found a couple sinkers.  His cutter was impressive, and he threw two breaking pitches - a sweeping slider and a slow curve. 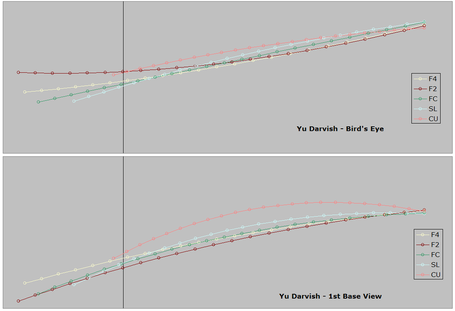 In order to draw the curve all the way to the front of the plate, you can see how far I had to run out the heaters.  Darvish hit 97.9 with the fastball, consistently throwing 94-96.  His slowest curve came in just over 70 mph - hitters have to deal with a nearly 30 mph gap in his velocity, which is about the same as Roy Oswalt's heater-curveball split.

To get a better idea of the diversity of the breaking balls, see the inset of this spin movement graph. 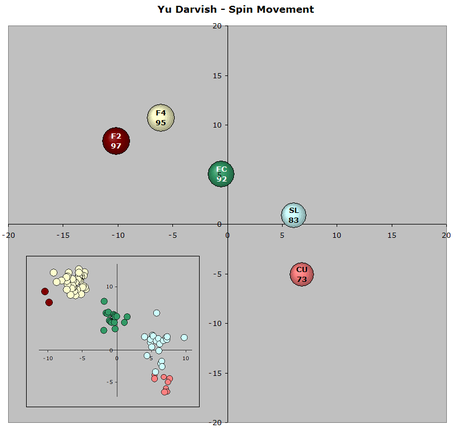 Darvish has a couple looks on that slider - the one that sits down by the curves, in terms of the sink, is a different speed than the curves.  Yu's slowest slider was still 7 mph faster than his fastest curve.

Here's a quick look at location - there isn't enough data to do this by pitch yet. 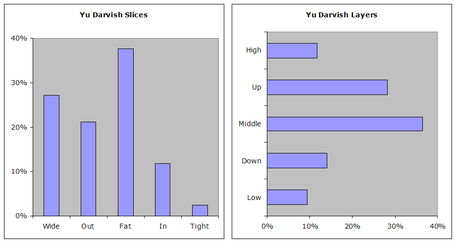 Up and away seems to be his preference, but down the pipe may be his favorite.  His stuff is good enough to get away with that.

And, finally, despite the small samples, here's a taste of how nasty he was.

That's an insane overall whiff rate, small sample and all.  Everything was thrown for strikes, but the curve.  Hitters couldn't get a bat on the four-seam, which is highly unusual, and the slider was apparently invisible.  They'd swing and miss, or take for strikes.

He wasn't getting hitters chasing stuff out of the zone, but he certainly had them fooled within it.  As the nkSLG (or slugging on contact) and TBP (total bases per pitch thrown) show, he wasn't hit hard - except for the occasional four-seamer that got squared.

All told, despite the loss and shaky start, Yu Darvish is the real deal.  He could front a big league staff today, but we'll have to wait until he reaches free agency in Japan.