In continuation of my division by division series, it's now the AL Central's turn. Here again are Victor's surplus values for the different categories of prospects:

Yes it is odd, but top ten pitchers were shown to have less value than top 11-50 pitchers. It's probably a sample size issue, but the more important truth is that pitchers as a group have rather high rates of attrition. We all would rather have David Price than Jhoulys Chacin on our team, yes, I know, but there is still the chance they produce equal value for a number of different reasons. 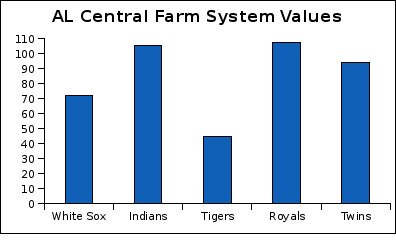 Graph time for the two top systems in the division-

Total val.:  $105.74M. 43% of Cleveland's value comes on players they acquired in mid-season trades. You can't really blame Milwaukee for giving up LaPorta and others to acquire Sabathia, but Carlos Santana for Casey Blake is a dumb and inexcusable move on the part of Ned Colletti. Blake contributed 0 WSAB for the Dodgers, whereas Santana and Jon Meloan account for $22.1M in surplus value.

Total val.: $107.5M. The Royals have one of the more underrated farm systems in baseball. Mike Moustakas and Eric Hosmer are a nifty 1-2 punch at the top of the system. After that, there's not much star talent, but they have a very nice collection of B grade arms.

In summary, this division has a couple of underrated farm systems in the Twins and Royals, and one of the more overrated systems in the White Sox. Well, they're not really a highly rated system to begin with - most rankings have them in the middle of the pack - but I think they're worse than that.

Next up: The AL East.