Cuba and Japan got together in San Diego for a rematch of the 2006 WBC Championship.  It's a rare treat to see the Cubans play on American soil, and getting PITCHf/x on their star pitchers is a cool side effect of the WBC.

Not that the other countries aren't interesting.  They have their own stars and are stocked, in some cases, with MLB prospects.  But this is Cuba, so it feels like we are getting an inside look at something that's normally inaccessible.

Then again, timing is everything.  Yu Darvish is, perhaps, a great pitcher, and one we won't see in America very much for the next several years.  But he didn't pitch for Japan today.  And, yes, the real story was Dice K, with six shutout innings, making efficient use of his pitch limit - sneaking past it legally during the final out of his final frame.

The young flamethrower got the start and had 85 pitches to work with, but didn't get close to the 2nd round limit.  Pulled in the third inning, after 50 chucks, Chapman yielded three walks, three hits and three earned runs.  His nasty stuff only got him one strikeout. 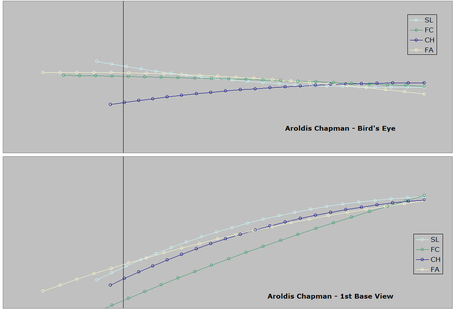 Gonzalez came in to relieve Chapman, and fared no better.  Retiring one batter, the lefty was pulled after giving up two singles, a sacrifice fly and a run-scoring wild pitch. 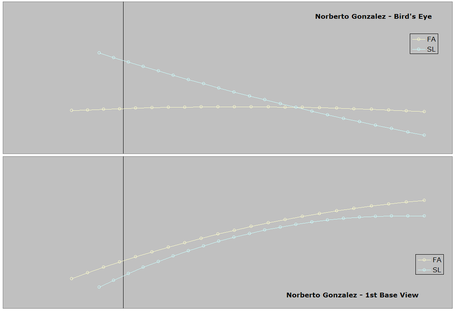 The veteran Jimenez ended the rally in the third, striking out Uchikawa on three breaking balls and two unknown pitches (PITCHf/x took a nap).  Jimenez gave up a run in the fourth, and got in more trouble in the fifth. 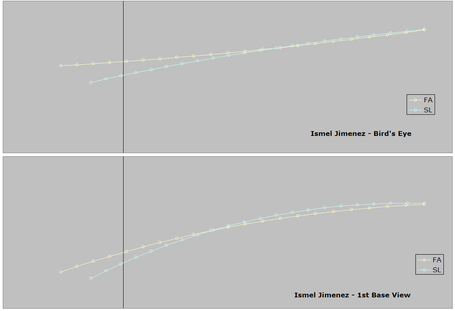 The third and last lefty pitcher on the Cuban roster came in with two runners on in the 5th to face Fukudome.  Fukudome loaded the bases on an infield single, but Yulieski got Johjima on a soft liner and Iwamura looking.  Gonzalez then went on to work a 1-2-3 6th inning. 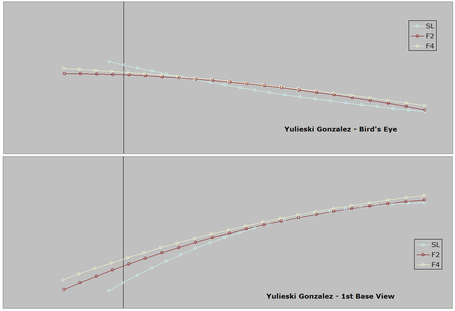 With Cuba trailing 5-0, Maya took the mound for the 7th inning.  At this point I began to accept a simple fact - Lazo f/x would have to wait for another day.  Maya gave Cuba just their second 1-2-3 inning of the game, and their second straight.  After getting two outs in the 8th, Maya fell behind 2-1 to Iwamura and was pulled, right then and there. 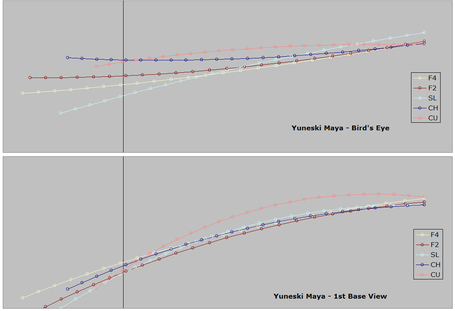 Ulacia, who seemed to enter under inexplicable circumstances, eventually threw balls three and four to Iwamura.  The resulting walk was charged to Maya.  A fly ball off the bat of Ichiro ended the inning.  What PITCHf/x won't show you is Ulacia's delivery. Or, specifically, his finish.  His feet splay out, sliding apart into a near split. 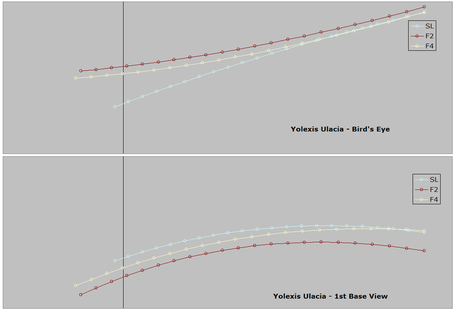 When Ulacia got into trouble with one out in the 9th, Cuba called on Garcia to finish the mop-up job.  Already down 6-0 and with one man on, my attention began to drift to the elimination game in Miami.  As Vlad's first pitch went wild, moving a runner into scoring position, I wondered if Maya still had a few innings in him.  Garcia did just fine, throwing upper 90's and retiring the side with ease. 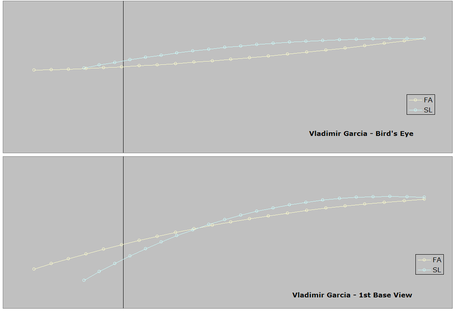