A post today on a couple of things I've been wondering about. Conventional baseball wisdom tells us that the more power a hitter has, the less strikes he'll see. The idea goes that pitchers will be afraid to challenge a highly skilled power hitter and thus, will be more likely to throw balls or pitch around that hitter.

And, on the flip side, that hitters with power -- or high Isolated Power scores -- are more likely to strike out because in order to hit for a lot of power, they're taking a certain approach at the plate that is conducive to striking out.

Both of these statements seem pretty straight forward and true to what we've seen play out on the diamond. Let's find out if our perceptions (or shared wisdom) mesh with reality.

A quick word on methodology and a few definitions: 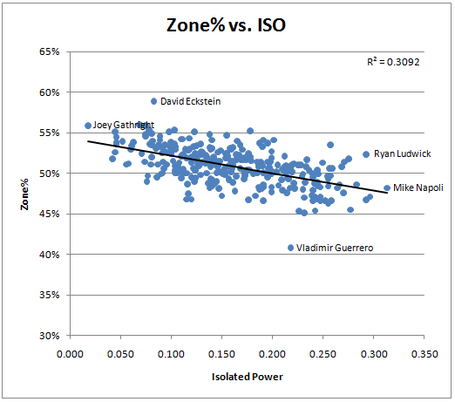 On this scatter plot the x-axis is the ISO scores and the y-axis is the Zone% score, or how many strikes a hitter saw in the strike zone. You can see a pretty good grouping of MLB hitters by ISO skill and the likeliness of seeing strikes. Overall, it appears that the more power a hitter possesses, the less strikes they'll see. But, it's not a slam dunk. The R2 score of 0.3092 is indicating an obvious correlation, but it's also telling us that there's some other factors involved in hitters seeing strikes that we aren't seeing in this plot.

I've labeled a few interesting players on the plot. David Eckstein saw the most strikes of anyone in our sample. His sub-.100 ISO is a factor in that pitchers aren't afraid to challenge Eckstein because he's not going to hit the ball out of the park. Joey Gathright had the lowest ISO score of any hitter in my sample. When your ISO dips below .050, you've officially got no power.

On the other end, we've got a few guys like Ryan Ludwick, Mike Napoli, and Vlad Guerrero. For his ISO (.292) Ludwick saw a good bit of strikes relative to his other high-powered peers. I had no idea Mike Napoli hit such a high ISO last season. In 274 PAs he smacked 20 HRs! That's a HR per every 13.7 PA. His ISO of .313 was tops among our players and it's pretty impressive to consider that Napoli racked up +3.1 wins of value in part-time play. Vlad doesn't see any strikes, but with his hitting style, he probably doesn't mind. His ISO of .218 is above-average, but it's nowhere close to his glory days. Maybe pitchers should reconsider their approach with him?

Do Power Hitters Strike Out More? 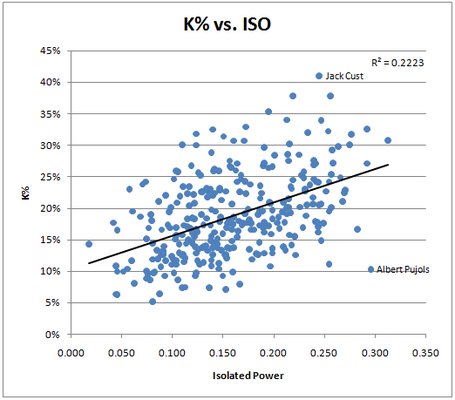 On this scatter plot, we again have the ISO scores on the x-axis. On the y-axis we've got the K% or how many times per PA a hitter strikes out. The grouping isn't as tight, but there is an obvious relationship with striking out and hitting for power. The trend line is slanted upwards indicating that the more power you hit for, the more likely you'll be to strike out.

As with this plot, I've labeled a couple of interesting hitters. The hitters I've labeled are complete opposites in their plate approach, but in terms of ISO, they aren't that different. These two hitters, of course, are Jack Cust and Albert Pujols. Pujols does have the greater ISO, but they're in the same neighborhood in terms of power production. Where they greatly differ is their plate approach. In order to hit for power, Cust employs a certain plate approach that is very conducive to striking out. His K% of 41 led all of our hitters. I've you've seen Cust hit, you know that when he's hitting he's got one goal in mind: to hit the ball out of the park. Albert Pujols is just an amazing hitter. No other hitter in his ISO range struck out less. Pujols' K% of 10.3% is out of this world. Consider this, Ichiro has a career K% of 9.6%. Pujols essentially possesses the same contact skills that Ichiro does, but with prodigious power. It's no wonder he's the best hitter in the game right now.

So, even though we've asked two questions that seem like general knowledge, I think we got some good answers. Yes, hitters with high ISO scores tend to see less strikes than those who lack such power. I think it's pretty easy to understand why -- if you can't do damage (ie: hit for extra-bases or hit HRs) a pitcher should be more likely to challenge you at the plate. And, hitters with high ISO scores tend to strike out more. In order to hit HRs most hitters have to emphasize a certain approach at the plate that also puts them at risk for the K. Not everyone is Jack Cust and Albert Pujols in terms of K% by  ISO, but they do fall in between them.