Yes, more PITCHf/x from the World Baseball Classic.  Round 2 will be fully covered by the system, so you'll get some Dutch guys from Ohio.  For now, straight out of Brooklyn, NY (which should be enough to qualify you for Team Italy, IMO) is former 1st rounder Adam Ottavino.

Seeing how he's a Cardinals prospect, I figured I get the run-down on him from Erik Manning.  (Erik has interviewed Ottavino - check it out)

Here's some of what Erik told me via email:

Ottavino loved the ideas he was getting from Strom, saying he "felt liberated" out of last year's spring training. Well, he instead regressed at AA. He got all out of sorts, trying to do too much with the instruction he received.

He tried a pendulum swing with his arms and even started raising his hands high above his head as part of his delivery. During the season, several coaches worked with him to simplify.

He started to get back on track in the AFL and management raved about him early in spring training. Ottavino acknowledged he was thinking to much, saying "I'm done playing that mental game".

He throws anywhere from 91-96 with his fastball, 2 and 4-seam, has a slider and a curve. The SL can be good at times, CV is more of a show-me pitch. I think Law called him a reliever on draft day. He hasn't lived up to his promise as a 1st rounder.

Erik also points out Ottavino has gained 30 lbs. since last Spring - when he reported after a serious bout of food poisoning.

Ottavino threw 50 pitches in a solid outing against Venezuela.  As with the first match-up in Toronto, the Italian bullpen couldn't hold on, and their offense couldn't score.  Ottavino's three innings featured fastballs (two-seam and four-seam) and a slider, but no curveballs*.  The two-seam fastball appears to have become his bread-and-butter pitch.

Splitting the fastballs was pretty tough, but I'll go with it for now.  Overall, Ottavino was impressive - he threw strikes and managed to miss bats.  He also got an above average amount of takes in the zone (Watch).  Ottavino threw sliders more often when even and ahead in the count, but he also threw them when behind.

*some of those sliders are kinda slow, but not enough to be called curves - yet.  Wish he had more chances to pitch in a big league park, but I think he'll be around again, sooner than later.

Also impressive is the tightness of his release points - the average values are pretty much on top of each other.  The scatter plot (inset) shows the aggregate isn't misleading. 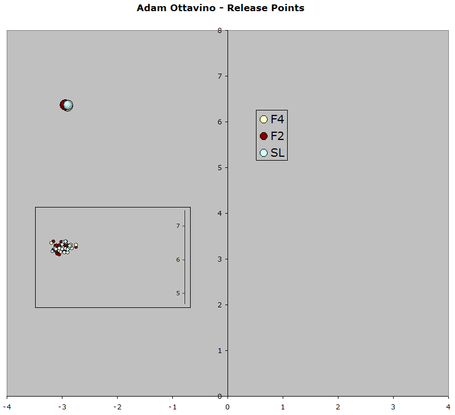 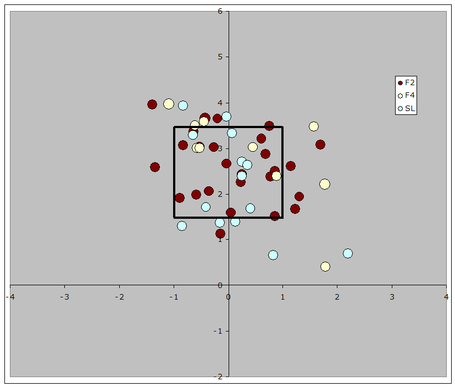 Not a lot down-and-in on righties (this is from the catcher's view).  Turing those dots into bar graphs - which can be misleading with the small samples, but fun:

Wide and Tight are off the plate (the mythical 2 ft. wide plate).  Another gold star to Mr. Ottavino for working inside but not too far inside.  Or is that living dangerously?  As in, if you're going to miss in, really miss in.  The slider is pretty much down the pipe, but less likely to be found inside.

I think the layers came out pretty cool.  High and Low are out of the zone.  Four-seam up, two-seam a little more up than many would like to see a sinker, slider down.  So, even though it was often "fat", the slider was often out of reach.  Notice on the scatter plot, there's a cluster of them right in the middle at the bottom of the reference zone.

Ottavino didn't appear to wear down at all:

That's good velocity, good accuracy (or so it seems), consistent delivery and velocity over a 50 pitch outing.

I don't think being a starter is out of the question for Ottavino (a change-up would be nice), but the bullpen is be a place where he could be a contributor in short order.

I'll leave you with Ottavino's spin movement and flight paths. 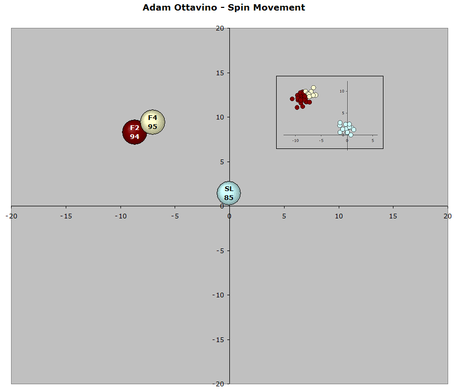 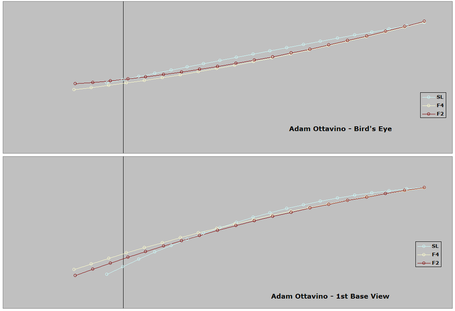 Not sure who will be next (Cody Cillo is a possiblity, but I'm waiting on something with regards to him), so I'm open to requests/suggestions.