Graph of the Day: Plate Discipline (or not)

Share All sharing options for: Graph of the Day: Plate Discipline (or not) 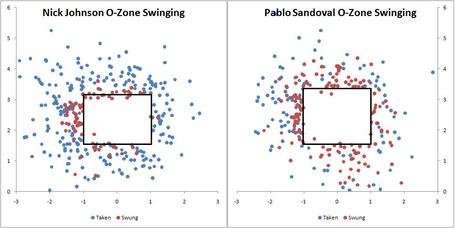 Of players who had at least 140 PA in 2008, Nick Johnson ranked lowest in swinging at pitches out of the zone at 10.0%. Pablo Sandoval ranked highest at 53.8%. These are their pitch charts on pitches out of the zone, red being pitches they swung at, blue pitches they took. For kicks, their contact rates on these pitches were 71% and 79.4% for Johnson and Sandoval respectively.

The "strike zone" top and bottom is an average of the sz_top and sz_bot of all the player's PA per pitch fx. This is why it may look like some of the out of zone pitches are in the strike zone.