Jeff Francis - Hurt but Not Showing It?

Share All sharing options for: Jeff Francis - Hurt but Not Showing It?

Jeff Francis is not only out of the WBC, he may go under the knife and miss some serious playing time.  Without going into gory details, I took a quick look at Francis' PITCHf/x numbers to see if there's anything jumping out.

Here's pitch speed at 55 ft. from the plate (sMPH) and at the front edge of home (eMPH), without park/weather adjustments. 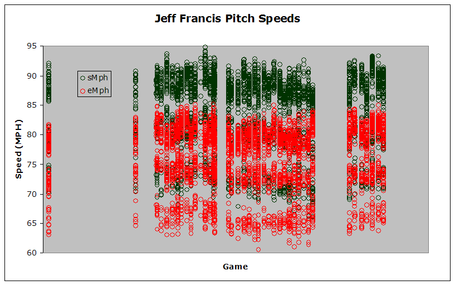 The game on the far left is from April 2007.  After the big gap, you have a game from July '07, and then a lot of games from August, September and October to round out the season, and playoffs. In the middle, after another small gap, is 2008.  The gap before the final block of games is from Francis' DL stint.

While it looks like Francis lost a bit of velocity at the high end before going on the DL, the end speed picture doesn't match - and those numbers are more reliable from park to park*,  In any case, he looks to have recovered after the DL visit, if anything was lost to begin with.

* I'm testing my park/data correction method.  Some tests have gone very well, some not so much.

Another place to look is pitch height.  The only thing I can sniff out of this graph is the lack of curves in the dirt in 2008.  The solid line is the ground the dashed lines are strike zone references. 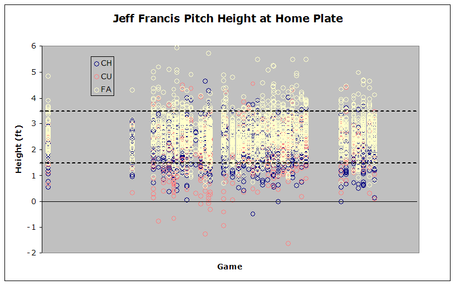 Rockie fans, any suggestions on where else to look - where did you see Francis struggle that may be related to the shoulder injury?