(This is cross-posted from my blog Bay City Ball)

I don’t know about you, but I think I’m officially tried of hearing about Manny Ramirez and the Giants. It’s been one of the hotter topics of late on the Internet and Giants websites. We’ve even talked a little about what Manny would bring to the Giants here on BCB. There’s been a lot of good discussion regarding the merits of Ramirez. How much will he cost? Should the Giants even be considering him? Will he jive with the Bonds-less GAMER clubhouse? How bad is his defense? Will he be motivated enough to play in San Francisco? And so on and so forth.

Since most of these topics have been covered here — or elsewhere — I’m not going to delve back into them today. Instead, I wanted to present a quick graph comparing the value of Fred Lewis vs Manny and some other remaining free agent left fielders. The Giants would be a better team with Ramirez in left field but I feel that the average fan, and maybe the media, is expecting a Ramirez acquisition to push this team into 90 wins territory. 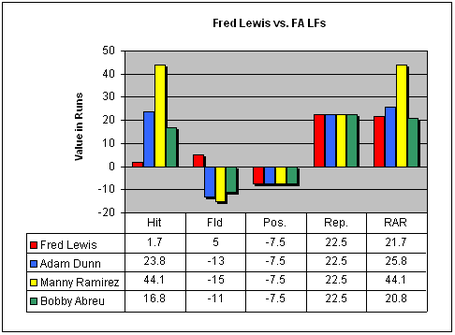 (Quick note: For the offense I've set lgwOBA to .332. Both offense and defensive projections are courtesy of CHONE)

In the WAR projections we have the ‘09 Giants projected at an 82-83 win team. An addition of Ramirez — without any other roster changes or re-working Lewis back into some sort of playing role — would push the team to a projection of 84-85 wins. A push of two wins for a fringe team looking to get into the playoffs is big, but I think if you polled the average fan and asked him how many wins he or she thought Manny would add to the team, they’d expect much more than just two wins. But, make no mistake, two wins is a significant improvement for a team like the Giants.

And that might be my biggest gripe with the idea of Manny Ramirez. It’s not so much the player that we might be getting, it’s the disconnect between reality and the expectations of fans and the media. The idea of having to read potential Bruce Jenkins columns on ‘Why Can’t the Giants Win With Manny?’ is enough to make me want to run into a wall, Aaron Rowand GAMER-style. I think until anything actually happens, I’m going to shut off my brain to all things Ramirez.

Have pitchers and catchers reported yet?