Mariano's Gonna Cut You, Everybody Knows It, And Nobody Can Do Anything About It

Share All sharing options for: Mariano's Gonna Cut You, Everybody Knows It, And Nobody Can Do Anything About It

Any way I can make that title any longer?

As a fan of statistics, one thing that always interests me is an anomaly. As a fan of sabermetrics, one thing that interests me is questioning commonly held baseball beliefs, such as the need for pitchers to mix their pitches. Mariano Rivera's 2008 was a perfect blend of these two interests and frankly I'm surprised I haven't heard more about it. You would think out of all the teams a New York Yankees pitcher would have garnered more headlines or a few more than just 3 third place Cy Young votes. But for some reason Mo's 2008 season hasn't received the credit I think it deserves.

Stats bolded for utter ridiculousness. I don't know how far you have to go back to find a K:BB (12.83!!!) of that magnitude for someone who's pitched at least 50 innings, I couldn't find anyone within 2 K/BB of it in the past decade. The WHIP is also just sick, not much else needs to be said about it. Batters simply did not reach base much against Rivera.

But it's not Rivera's stat line that makes him an anomaly, especially since it's not that far removed from his career numbers. What made Rivera's 2008 so different was his nearly complete reliance on one pitch to achieve it, and it wasn't even a traditional fastball. I'm talking of course about what some have dubbed the greatest pitch in the history of the game, his cutter.

I called Rivera an anomaly was because he threw the fastball less than any other pitcher with at least 50 IP last year except for Tim Wakefield. Per Fangraphs, he threw the fastball 18% of the time, and the cutter 82% of the time. That 82% is also the second highest for any single pitch, only Daniel Cabrera threw a single pitch more often (fastball, 82.6% of the time). That one pitch was not quite as successful as Riveras though.

Sidenote: Yes, I realize that a cutter is really a fastball variant, but when I hear fastball I normally think of the four-seam and two-seam varieties. If you want to argue this you're free to, but you're wrong so let's just move on.

SBN is being fussy, it might be too large a gif to inline. You're going to have to click it to view the awesomeness, I swear it's not a rickroll.

Is it humanly possible to locate pitches like that? Obviously not, that's why Rivera's a deity, the Hammer of God. Doesn't matter if those Padres swung or not, those were going to be strike threes either way. But Rivera does get hitters to chase, as seen in the following chart: 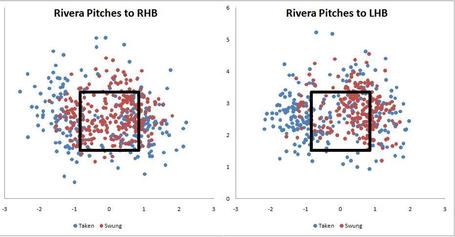 He works those lefties high and inside, but the righties get pitches all over the place. He's not throwing many down the pipe to batters of either hand though.

The chart also bring up another interesting bit regarding Rivera's success. Notice how many pitches are taken pretty far out of the zone. Normally you would think a guy who only walks 6 batters in 70.2 IP would attack the zone at will, but Rivera's strike percentage was "only" 69%. He threw 303 of his 979 pitches for balls, and as the charts show a lot more pitches would have been balls had they not been chased by hitters.

The one split that really jumped out to me was the full count. Rivera actually got to the full count in 29 PA, but only walked the batter in 2 of those PA. That's an ISO-OBP of only .068, compared to the league average of .241. Now of course 29 is a small sample (Rivera's ISO-OBP in that situation for his career is .202) but it's still pretty damn impressive anyway.

While as noted before he throws the cutter over 4/5 the time, it's really not the same cutter everytime. In fact, the distribution is quite large. 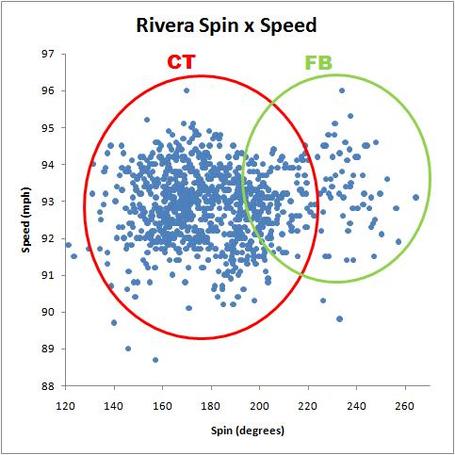 The overlap is because I'm not exactly sure which pitches in the middle are fastballs and which are cutters. But the important thing to note is the good 50 degree range his splitter seems to fall in with regards to spin. So while it's technically the same pitch, Mo mixes it up greatly in terms of spin release.

Doesn't need to mix it up speed wise, with the vast majority of both the cutter and fastball clocking in between 92 and 94 mph. By some quick rough calculations it comes out to about a hundredth of a second difference in time to reach home plate (.446 seconds for 92 mph and .435 for 94 mph.) The fact that hitters can more or less time themselves to within a hundredth of a second of when to swing and still can't do anything about Rivera's pitches speaks volumes of them.

We can see what effect the varying amounts of spin does to his cutter by looking at his movement chart. 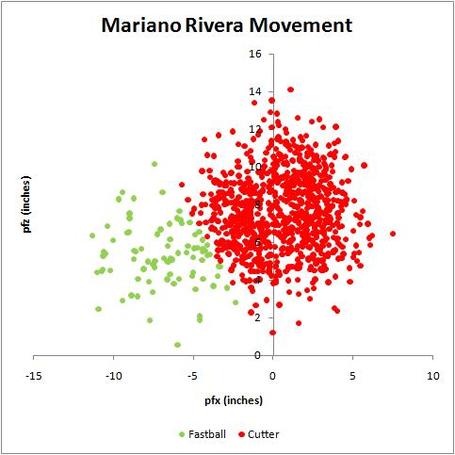 I know, right? How can that all be the same pitch? It darts in and out a good 3-4 inches either way and vertically moves in a half foot range. Also notice how rarely it crosses the axis. While Rivera mixes which way the ball "cuts", it doesn't go straight very often. His fastball tails quite heavily, but you can see he's not throwing it all that often. 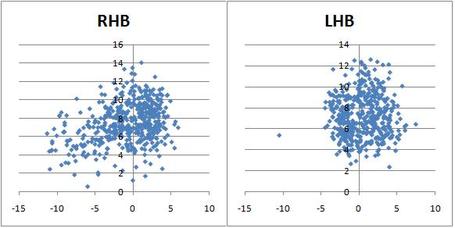 Rivera doesn't throw his fastball to LHB. Well, I guess he threw one last year to Brian Giles, but otherwise lefties can just sit on the cutter. And hit .147/.173/.194 off it last year in 134 PA. Haha, does that make so little sense to anyone else? For major league LHBs to know exactly what pitch is coming at exactly what time, and just fail to do anything with it. So awesome.