In Glavine's return to Atlanta, his long-held belief that the strike zone is for losers (or guys with better stuff) held firm.  No one* threw less strikes in 2008 than Tom Glavine.   He also managed to avoid the prime hitting area** "better" than anyone else in the majors, too.

** the middle 8 inches of the plate + the next four inches inside (AKA fatins). 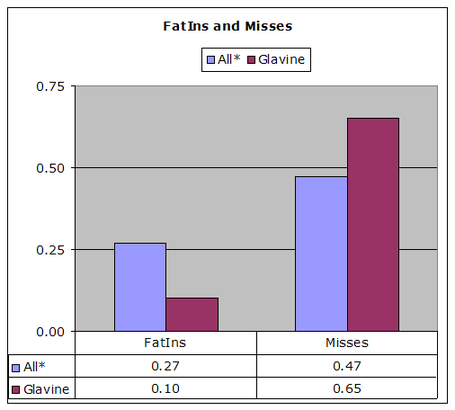 Over 100 pitches, Glavine threw about 18 more balls out of the zone than an average pitcher.  He threw 17 less pitches down the pipe.

Let's slice that up another way - to be in a "slice", the ball can't be high or low out of the zone. I'll drill in below, but, for now, here's "out", "fat" and "in".  Fat is part of the FatIns above, but here, In and Out will cover balls and strikes. 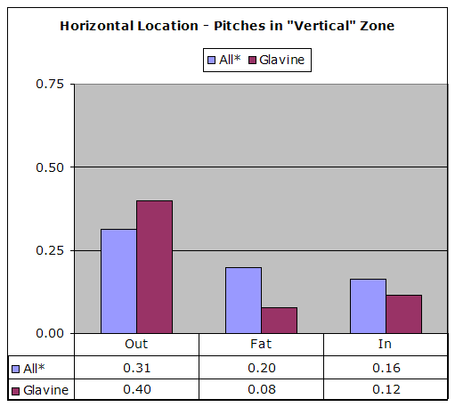 Glavine does tend to work away out of the zone, amongst the most extreme in the baseball, but not all the way to the outer limits (AKA Livan Hernandez).  Here's another look, each slice is shown now. 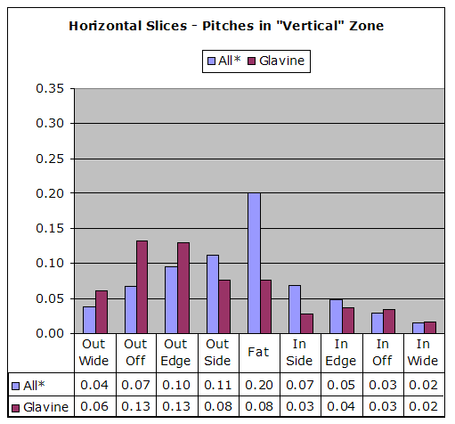 Glavine likes that outside edge, as we all know.  The "edge"is the last inch of the plate, plus a region off the plate that is typically viewed by batters and umpires as strikes.  The "sides" are those 4 inches just out and in from the "fat".

Even more notable than the outside nibbling, is the lack of fat and sides - both of them.  The for hitting the middle three slices is around 38%, while Glavine only goes there about 19% of the time - essentially, half as often.

Glavine is primarily a fastball (FA) and change-up (CH) artist, but he mixed in a few dozen other pitches - sliders (SL), cutters (FC) and curves (CU). With the two primary pitches, Glavine, as you'd expect, follows his overall pattern with little deviation. 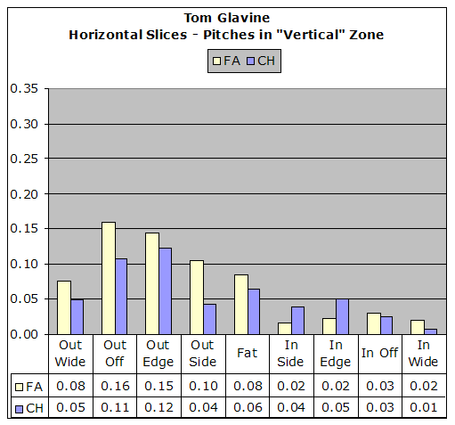 He may sneak in a little with the change, but the fastball is away, away and away.

Now, throw in the other three pitches, and you'll see the slider works about the same way as the first two, but the cutter and curve do not. 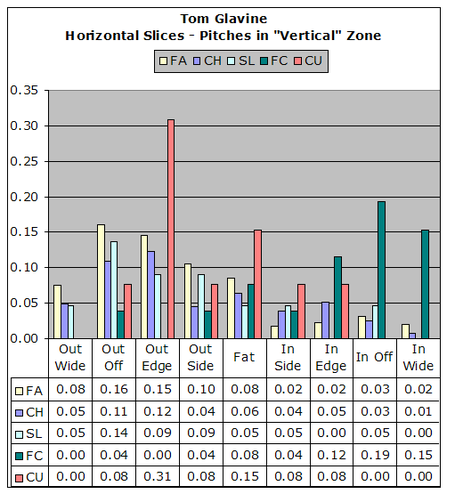 He'll throw the curve over the plate, and go inside with the cutter.  Other than that, Glavine stays away and/or out of the zone like nobody else in the game.