Share All sharing options for: Glavine Returns (Again) to Atlanta

The Atlanta Braves have come to terms with 43-year-old LHP Tom Glavine this morning on a 1-year, $1M contract with an additional $3.5M in incentives. Glavine, a staple of the dominant 90's Braves rotation, returned to Atlanta in 2008 after pitching for 5 seasons in New York with the Mets. His homecoming excited many fans, but for Glavine, returning home wasn't as sweet as he expected. Over the course of the season, he battled elbow problems and only made 13 starts before undergoing surgery in August. It was the first time in Glavine's career that he failed to make at least 28 starts in a full season of baseball.

Glavine is expected to fill the 5th spot in Atlantas revamped rotation. How has Glavine changed over the last four years? And what are his chances going foward? Let's check out some graphs and try to answer those questions after the jump.

(All pitching data courtesy of FanGraphs) 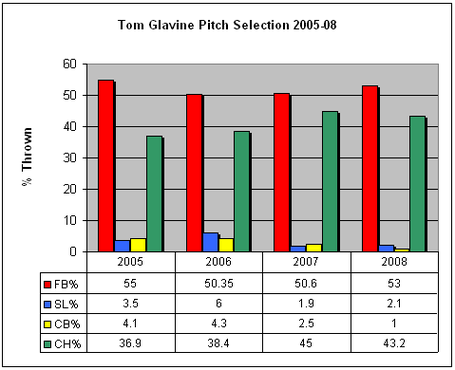 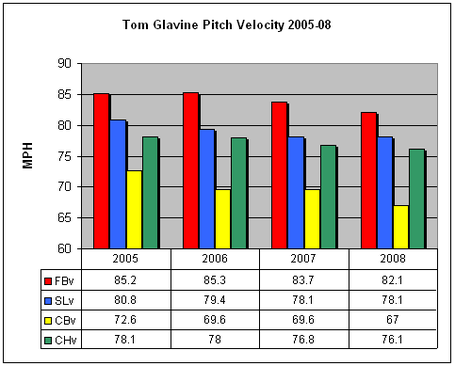 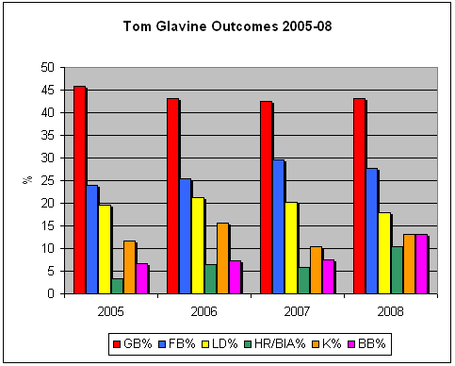 Valuing Glavine in the Future

I've set my replacement level starter in the NL to a 5.50 FIP. Here's the math:

A .6 WAR player should be worth about $2.5-3M in a season. Glavine's baseline for his contract is $1M and it could take him up to $4.5M in total if he hits certain incecntives -- which I don't think have been released yet, but they are probably based on playing time.

It's not a bad deal for the Braves if Glavine is healthy. The best case scenario is that his elbow is recovered and he makes 20+ starts while posting his usual numbers, if he does that, the contract should pay for itself. The deal probably also has some fan value, I'm guessing that a few more Atlanta fans might come out for a Glavine start because of nostalgia. If Glavine gets hurt and only pitches 60 innings, the Braves will be only be out of the $1M it cost to sign him because he won't be hitting those playing time incentives. Really, though, there isn't much performance needed to clear the $1M that the Braves have spent on Glavine.

As a pitcher, despite the velocity loss, Glavine really hasn't changed his style very much. He's still going to work off his fastball and changeup, same as it ever was. It's a nice pickup for Atlanta that should help the team some on the field and in the marketing department.