A's Grab Wuertz and his Slider, but the Fastball is Also Included

Share All sharing options for: A's Grab Wuertz and his Slider, but the Fastball is Also Included

Jim Hendry probably decided now was the time to trade Michael Wuertz, with his value bound to decrease if he struggles in Spring Training.  Out of options, and due $2 million, the Cubs only got two middling prospects in exchange.

Wuertz can be effective and has a top notch slider, but his fastball has not done the job.

Drilling in on fastball/slider - these flight paths show a nice overlapping plane.  These are aggregate pitches, but do show the potential effectiveness/deception, when that slider comes in sweeping and sinking - not tailing like the fastball.  I split them by batter hand and season, same results, with subtle differences. 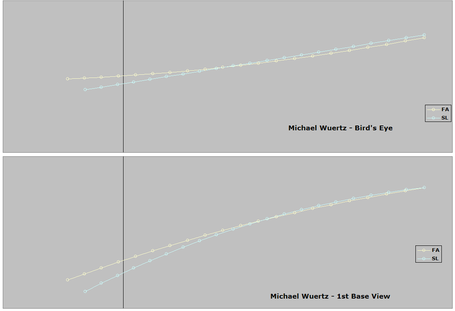 Wuertz's slider was very impressive.  Over 50% found the 24-inch wide "as played" strike zone, yet it yielded a whiff rate of .395.  The slider was chased over 37% of the time it traveled out of the zone, which helped that whiff rate and the nkSLG (.399).

The problem with Wuertz was the fastball.  We're not talking a huge problem, but a notable weakeness.  His velocity was OK, not great (although he may have lost a little since 2007), but his control is another story.  Wuertz struggled in that area, ending up with a B:CS ratio of 3.4 on his fastball.  That's about 1.5 balls more than an average fastball, and, amazingly, 1.2 more than his own slider.  His fastball was also hit hard (nkSLG=.681).  This combination probably drove Lou Piniella nuts.

Wuertz can't put guys away with the fastball, and he can't get ahead, either.  Maybe he sets-up the slider with it, but that may be generous.  It is rather difficult to set-up a first pitch slider, unless by reputation.

If Oakland can get Wuertz to spot the heater better, whether it be in terms of location or sequence, that slider will be as tough, if not tougher, than it has been in during his Cub years.