Cardinals closer candidate Chris Perez (C4P?) is doing some work on his release point (which is somehow not a mechanical issue in Perez's mind) and considering a new role for his curveball, according to the Post-Dispatch (h/t CBNL):

Right now, it's not my mechanics, it's just the angle my arm takes as I throw the ball.

No, officer, I'm not driving like this because I'm drunk, it's because of the amount of alcohol that ends up in my stomach - something with the angle of the glass when I drink it.

They want to make it the same from one pitch to the other. That way I'm not giving up the pitch by having two different release points.

That would be wise.

Here's just one example - I've gone over a few games, and, while the pattern isn't always the same, Perez does have a tendency to use two arm angles.  What he does with them differs by batter hand, though.

This is measured in feet, catcher's view.  I've zoomed in from the normal 8x8 chart I use. 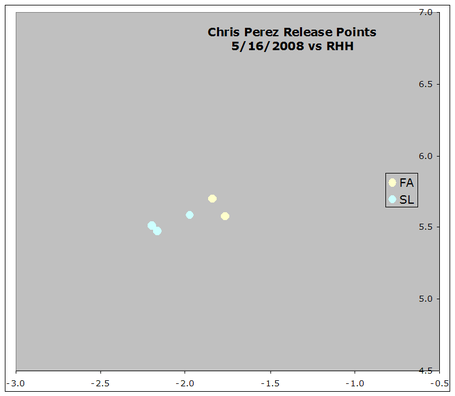 If this was just a matter of moving around on the rubber, you wouldn't see the drop in release height along with the lateral shift.  That doesn't mean he isn't moving around a little. 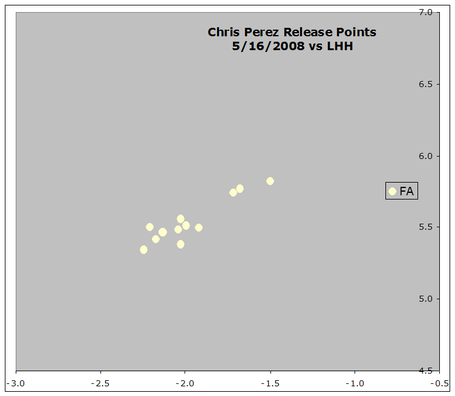 Strange, huh?  Drops lower more often against lefties, but with fastballs.  I would expect  a pitcher do that when the platoon advantage is in his favor.

When I looked at Perez, and some other candidates for the closer's gig, about six weeks ago, I noted a difference in his release points - but between the curveball and the slider/fastball.  This is a new layer that wasn't peeled back in that post.

Another layer that was peeled back, thanks to Erik Manning, was a change in slider effectiveness before-and-after Perez's mid-season demotion:

Perez's slider [h]as been regarded as a "plus" pitch in all his scouting reports in the minors by BA and other sources. He didn’t throw it effectively at all when he was first called up and therefore was sent down to AAA in July to iron his problems out. When he came back, for Aug-Sept. he struck out 10 per nine.

And he was spot on

Basically, Perez started throwing sliders for strikes more often, and to much better effect.  Was he already working on the arm angle, as in, when he was sent down?

It's hard to say, given the small sample of pitches, particularly by game, but you might be able to argue Perez had some improvements in his release point, but nothing as clear-cut as the performance data above.

This is the average release point, by game, against righties, for Perez's fastball and slider.  Taking only games with at least two of each (yes, that's not much to work with) and finding the difference yields a little hint, but not an answer.   This in is inches, not feet.

First up is side-to-side.  The longer the bar reaches to the left, the more Perez's slider release differed from the fastball release. For example, on May 20, the average slider was released nearly two inches left of the average fastball. 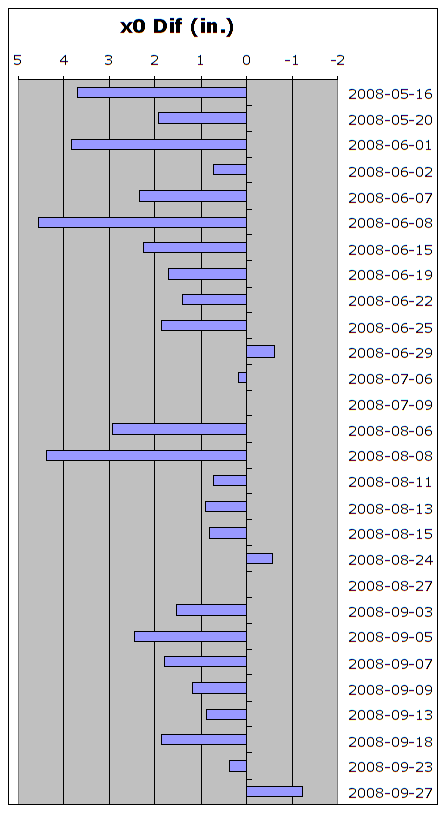 Here's the same thing, but for the release height.  Lower bar means lower release for the slider. 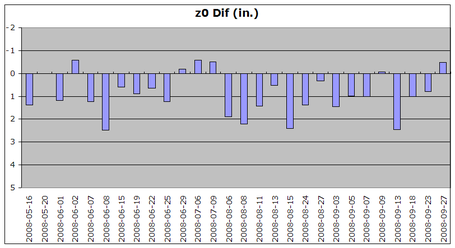 With such small samples, even a single pitch can really mess things up.  In any case, I can't say I see any reason to believe a change in arm slot either occured during 2008, not on any consistent basis.

On a final note, Perez talked about his curveball in the article:

Perez usually uses his curveball early in spring training and builds toward throwing the slider that he uses during the regular season. This year, he's considering keeping the curve and nurturing it as more than a show pitch.

"It's been looking good," Perez said. "Coach Marty (Mason) told me to throw a curve or a slider. Whether I can throw it consistently is the most important thing. They want me to have one. They don't care which."

To date, at least in the majors, Perez rarely used his curveball. Out of 738 pitches in the PITCHf/x database, Perez only has 14 curveballs. And each was thrown to a lefty hitter.  I managed to accurately state the obvious:

The curveball may just be a show-me pitch.

Given the issue with dropping down on the slider, would Perez benefit from throwing the overhand curveball instead? 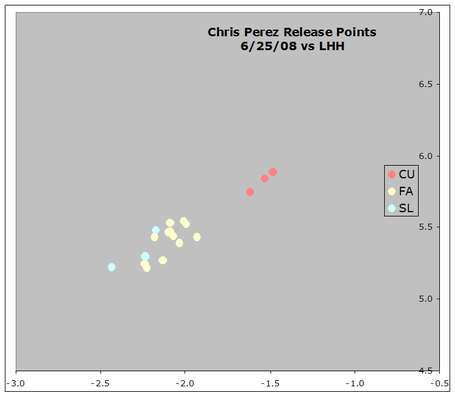 Hmm, not so much.