Are RHB getting the same treatment as LHB on pitches away?

Share All sharing options for: Are RHB getting the same treatment as LHB on pitches away?

Continuation of my last post on LHB being struck out on pitches away, only this time focusing on RHB.

Last time we learned that LHB have been getting a lot of strikeouts called against them on what appears to be a good few inches outside of the strike zone. What naturally follows, and was asked quite a bit about in the comments section, was how are RHB treated in the same situation? If they're getting the same strike zone at least it can be argued they're being treated equally, even if it's not really correct.

How much are RHB being struck out away? 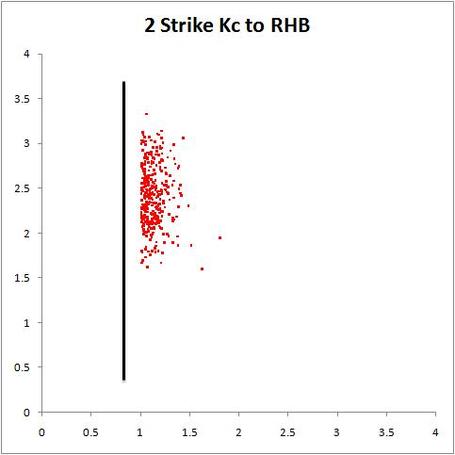 It's 332 times, a little less than 1/2 the amount of Kc to LHB (674) in the same 1+ feet away from the center of home plate. As you can see it's very dense closer to 1, with very few outliers. In fact there's really just one strike that's way out there, almost a good foot away from the end of the strikezone. It's a bit annoying since otherwise the farthest strikeout to a RHB was 1.62 feet away, which line up almost perfectly with my 1.61 number from the LHB experiment. Speaking of which, here's the side-by-side comparison of the two: 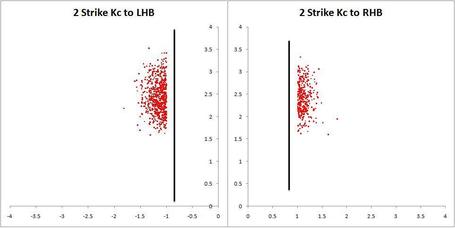 I was hoping that lone strike might have just been an error so I investigated it further. Turns out that one strike was actually a ring up of Angels OF Juan Rivera by A's LHP Greg Smith. As an Oakland fan I can only say thanks to the ump for that one. Here it is in picture form: 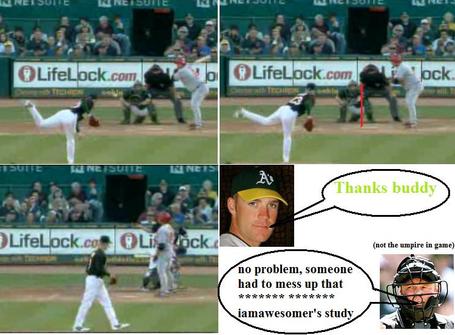 Little does the ump know that I'm not one to let one called strike three way off the plate get in the way of the symmetry of my study. So I did what any good sabermetrician does when he sees data that doesn't agree with his thought process. I ignored it.

Here's the (almost exact) same portion of the strike zone I looked at last time, from 1 foot to 1.62 feet. 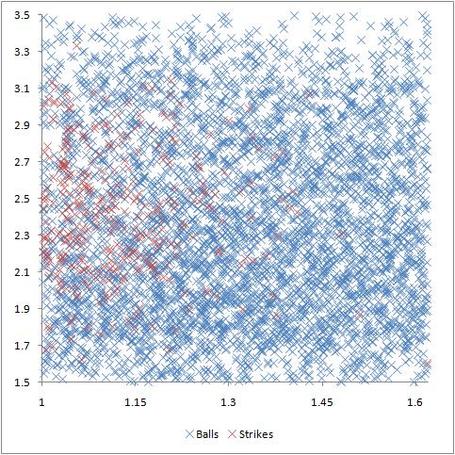 If we look at the first quarter [1, 1.16] 234 Kc occurred in this area. That's much less than the 364 called to LHB in the same section. The difference is even more drastic when you realize those 234 Kc account for 70% of the overall Kc away ro RHB. For LHB the [-1, -1.16] region only represented 55% of the Kc away. So not only are RHB seeing a lot less Kc away than LHB, their "strike zone" doesn't extend nearly as far as LHB for the majority of pitches.

Is there another explanation for this besides the umpires calling different zones for LHB and RHB?

It's hard to figure out. The numbers are an enormous disparity, and one I don't think we can simply chalk up to variance. Maybe there are some other factors that could explain the difference?

Maybe LHB took a lot more pitches in this zone than RHB?

Nope, this is certainly not the case. In fact, it was righties who took far more pitches in this zone. Check out this view, LHB on the left and RHB on the right. 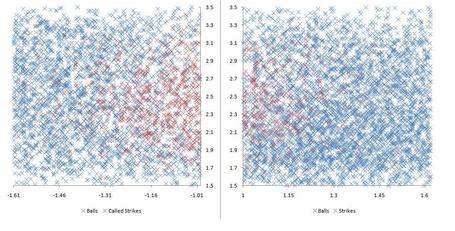 Damn does that side-by-side comparison really hammer it home or what? Look at the density disparity not only between the amount of red but also the amount of blue as well. Especially in the lower part of the strike zone on the right, looks like pitchers are throwing a lot of two strike pitches there.

Maybe RHB are swinging more in that area thus leading to less Kc?

I'm not even sure what I just wrote even makes logical sense. The graph above shows that RHB are clearly taking more pitches in that zone than LHB so unless they're just seeing an enormous amount of pitches overall in that zone compared to LHB, their swing percentage should be lower. And the data backs that up, with LHB swinging at 54.9% of the pitches in this disputed zone while RHB are swinging at 40.6%.

And even if they were swinging at more pitches in that area that shouldn't affect the percentage of taken pitches that are called strikes. The only way I could see this having an effect would be that RHB disproportionately swing at a certain type of pitch in this area that the umpire is calling a strike. I guess maybe a slider from a RHP might work, as the RHB would swing at it because it's tailing away from him and he thinks its a strike whereas the LHB takes it because it's starting farther outside and he thinks it will miss. Nothing in the data seems to indicate this though, and even then how often are RHP throwing sliders to LHB anyway.

I'm probably missing some things that could affect this, so suggest away if you can think of any. One reader last time mentioned a possible LOOGY effect, where a LHP is releasing the ball so far to the left that it might be distorting the umpire's view/perception of where a ball crosses the plate. Haven't gotten a chance yet to get a LOOGY list together but I think it's a good thought.

There's also the other parts of the strikezone to address, which I'll likely get to in a bit. The outside part was the one that interested me the most, because hitters are likely to do less damage on pitches away (harder to pull) and you hear all the talk about pitchers not being able to pitch inside anymore because of all the batter armor, protecting the hitter, etc. If that's really the case someone should let the umps know that RHB wear a bunch of armor too, because as it appears right now the strike zone extends farther away to LHB than to RHB.