Are LHB being unfairly struck out looking on pitches away?

Share All sharing options for: Are LHB being unfairly struck out looking on pitches away?

Before we begin I want readers to know that I understand the minutaie of such a topic. Originally this was going to be a post on the full count, but the ridiculous of one of my charts made me decide to look at this phenomena instead.

From my last post on the Oakland A's strike 3s looking and some other work I've got in the pipeline (here's a preview), I've noticed a disturbing trend with regard to left handed batters. They're being rung up a ridiculous amount of the time on pitches not just away, but way away. Here's what I'm talking about. 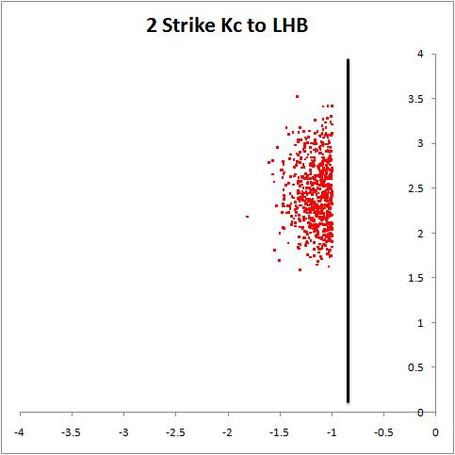 (Remember this is from the catcher/umpire perspective)

The black line represents 10 inches to the left of home plate, which is what I've seen referred to as the very edge of the strike zone. To account for a couple inches of error in the data as well as balls that may have crossed the strikezone farther in the y dimension (say a slider from a RHP that crosses home plate 5 inches behind the front of the plate where pitch f/x measures from) I've only taken the strikes that pitchfx said were centered at 1 foot to the left of home plate or farther left.

I'm also only concerned with pitches within the top and bottom of the batter's strikezone. If an ump is missing a ball both low and away, he's probably hopeless anyway. In this exercise there were only 10 Kc that were both high/low and away, so umps are pretty good with the knees to the letters rule. The ball grazes the edge of home plate rule, eh maybe not so much.

So How Bad Is It?

For those who don't want to count each dot, that's 674 Kc away which were likely unjustified, at least according to the data we are provided with. That's about a little over 1 every 4 games last season. I don't know if that sounds like a lot to you, but when you consider these are just the balls away to LHB (there are plenty of other OoZ Kc to both LHB and RHB high, low and every other direction) I think it's quite a problem.

The other thing I wanted to see was consistency. If these were always called strikes unjustly, at least the batter knows he needs to swing at a ball at this part of the "strike zone". If they're sometimes balls and other times strikes, well what is he supposed to do then? So here's the Kc overlaid on the balls away. 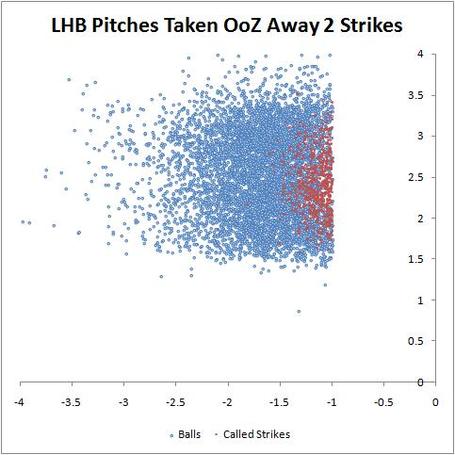 Hmmm, this picture isn't as helpful as I originally intended. I mean it's nice to see that umpires are calling balls 2 feet away from the center of home plate balls, and that pitchers throw a lot more balls way out there than I had expected, but it doesn't answer our consistency question at all. It's also way too many data points and has broken Excel's scatter plot more than a few times already today (R has a much steeper learning curve than I anticipated). Let's instead look at the zone in dispute.

Let's Zoom In A Bit

The furthest called strike was just under 1.61 feet away from the center of home plate, so I'm going to take that as the farthest point. I'm not trying to make the graph ingenuine by making the origin something other than (0,0), it's just that we are only concerned with a 1/2 foot by 2 foot area of the "strike zone" right now so it makes sense just to focus on that part. Just remember to look at the axis to make sense of the graph. 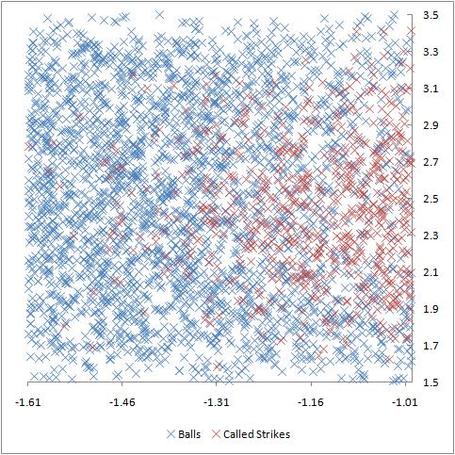 Well now isn't that interesting, looks like the umpires aren't even consistent. Even if they were consistently bad at least batters would know what to do. I'm not a huge fan of arbitrary zones, but I don't have the hang of the software yet to do a heat map so arbitrary it is.

A little more than 1/2 of the Kc fell in the first quarter of the graph horizontally [-1.00, -1.16], 364 Kc to be precise. In that same region, 462 Balls were called. So we can say the umps were wrong 44% of the time, just a bit under half. That's not very helpful to batters. I would think they would actually prefer if that number were much higher, say 80%, because then they at least know they need to swing at it since it will be called a strike. Obviously they'd prefer to be getting the proper strike zone called if anything, but that simply doesn't look like it's happening right now.

As to the break-even point, it's at 1.096 feet away from the center of home plate. All pitches between [-1 and -1.096] had a 50/50 chance of being called a ball or strike. It's only a little over 3 inches away from where the true strike zone is supposed to end, but it's called a game of inches for a reason, and those are very valuable to a pitcher.

What can be done?

Well, the easiest thing is just to tell the umpires to call the correct strike zone and it would make things nice and simple. Considering this fishy LHB business has been going on for a while though, it may not change anytime soon. So what else is to be done?

Sorry guys but it looks like you're getting screwed here a bit. Gotta learn to start swinging at those balls away with two strikes. I know you can't do much with them, but maybe you could foul them off?

For what it's worth batters swung at 4360 (54.9%) of pitches in the disputed area [-1, -1.61]. It's hard to say whether that's an effect of the umpire's calls or just batters swinging at worse pitches with 2 strikes on them, but that sounds like a lot. Even my favorite free swinger Pablo Sandoval "only" swung at 53.8% out of the zone overall last year.

Who knows, something good might even happen. Even Padres C Luke Carlin took one of those pitches deep   (highlighting mine) 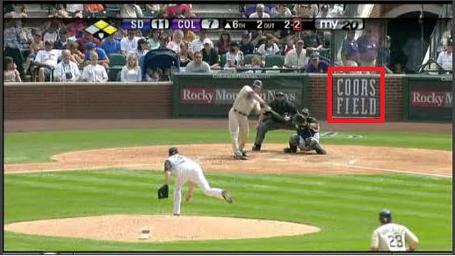 You've got it easy, the ump is practically giving you a few extra inches away, and most left handed batters probably aren't doing much damage even if they make contact in that area, only 8 HR were hit in that area with two strikes. Don't go to the well there every time since you might become too predictable, but if I was a LHP I'd throw sliders and curves in that area almost with reckless abandon. RHP with tailing fastballs are set as well.

You do enough to draw ire already just by wearing your uniform, though most of the time it's not deserved. In this instance it appears to be the case though, so learn to properly look over the catchers shoulder or figure out a better way to approach calling pitches away when a LHB is up, because you don't seem to be doing a very good job right now.