I'm not sure if we'll see Brian Burres in the majors again, but the Blue Jays seem to be willing to give him a shot.   Claimed off waivers, Burres became available when the Orioles decided Rich Hill was a better option.

Yes, according to at least some baseball people in the mid-Atlantic region, Rich Hill > Brian Burres.  Even with Hill's control problems, he at least has major league stuff.  The one thing that interests me in Burres is a change he made in Spring 2008 - adding a new arm angle against the occasional lefty batter.

Prior to 2008, Burres worked with five pitches - a two- and four-seam fastball (each around 89 mph), change-up (80), curveball (72) and slider (83).  Last season, two new pitches showed up.  One, spinning like a slider but at curveball speed, and a fastball, a little slower than the existing two-seamer but with more sink.  For simplicity, I'm calling the new pitches a slurve (SV) and a fastball (FA).  The first five pitches are abbreviated as F2, F4, CH, CU, SL.

Before breaking down the usage of the new arm angle, here's a look at Burres' flight paths for each slot. 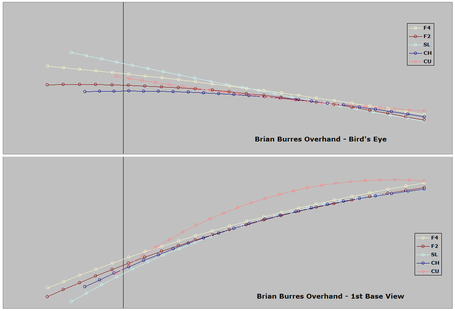 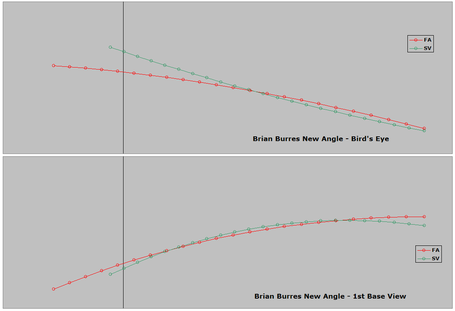 How long did this experiment last? 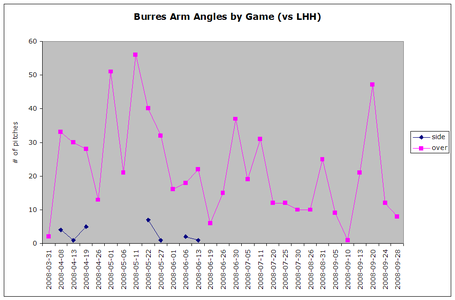 Not long at all.  Looks like he gave it up for a few weeks, tried again, and bailed.  How did it work out for him?

So, the new angle didn't work out too well.  He only broke it out on certain counts (never thrown with less than 1 strike, never with 3 balls, and only once when behind) and, despite being ahead in most cases, it did him very little good.