Share All sharing options for: The Braves Off Season - Playoff Probability Edition

The Atlanta Braves have had a busy (and sometimes controversial) offseason as they revamped their bullpen, subtracted an arm from their surplus of starters, and picked up a few average-ish bats.  The individual moves have been covered in depth by our outstanding group of writers here at BtB (Vasquez, Soriano) and by some of the heavy hitters in the sabr community (Cameron, Tango).  My goal in this article is to wrap all of the moves together and examine the offense as a whole.  My metric of choice is playoff probability added/subtracted, and I am going to look at two separate approaches to estimate the gains/losses.  First I will leverage the work Nick did here that looked at historic playoff probabilities given certain true talent level wins.  Second I will take a more contextual look at the problem by seeing how the moves affected the division race as it currently stack ups.

The results are after the jump

First I’ll simply reprint Nick’s charts as points of reference (if you want more details check out the linked article). 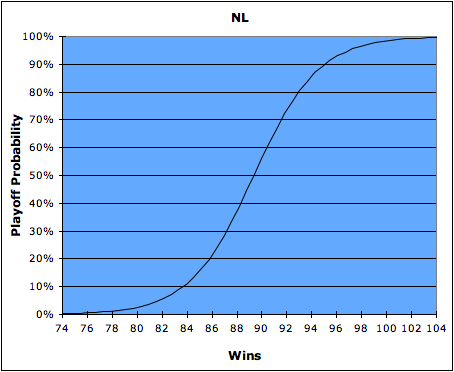 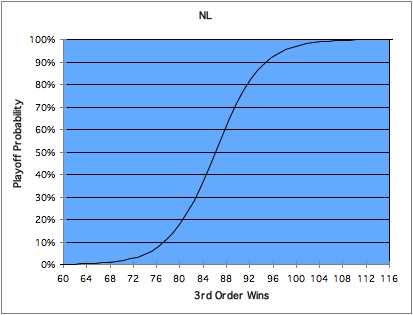 Clearly the one of use to us is the third order wins chart.  We can simply plug the estimated wins into the regression equation (which is embedded in the spreadsheets linked in the description article) and calculate the difference in probabilities.

Clearly we can all do the math and see that this method says the Braves gave up 0.15 of playoff probability THIS YEAR with their moves.  Also of note is that it also says they still have 0.70 chance to get in.

The inquisitive analyst / skeptic may say, "But Steve, why are we using historical information when it doesn’t specifically take into account division strength?  Clearly we know that the Braves have to contend with the Phillies, not to mention the Marlins, etc."

My answer would be that it’s tough to draw too many conclusions about division strength because there are enough rosters still in flux.  However with the Phillies being set at so many positions I think it could be worthwhile to compare just those two teams.  In order to do that, I need a similar estimate of true team talent for the Phils.  Going through a similar process to the one outlined above yields 94.8 wins.  So the question then becomes, "How often will either a 92.8 or 89.4 win team finish ahead of a 94.8 win team, and what is the resulting loss of going from ~93 to ~89 wins.  To answer that question I’m going to make some fairly large assumptions.  I’m going to assume the number of actual wins is normally distributed with a mean of the true talent wins (TTW) and a standard deviation of 5 wins (this is more or less just an educated guess using a few years a data and looking at the SD).  With these assumptions in place I can answer the posed question by simply looking at the statistic of Actual Braves Wins- Acutal Phillies Wins (henceforth ActB-ActP) and calculating P(B-P)>0.  Based on the assumption of normality (ActB-ActP)~N(TTW_B-TTW_P,sqrt(50)) [which is statspeak for the new statistic is also a normal distribution with a mean that is the difference of the two TTW and standard deviation that is sqrt(variance of TTW_B + variance of TTW_P)].  Since the new statistic is also normal, finding various probabilities just became much easier.  Plugging and chugging into the normal distribution in excel yields

Again we can all do the math and see that the numbers come to a difference of 0.17

An obvious question is, "What happens if the Braves spend more of the money they saved and spend it on another player?"  Without too much detail, adding one WAR would put them at 0.75 to make the playoffs (method 1).

When I mentioned to Nick that I'd be using his curves in this piece, he suggested that I redo the regression using projected wins as the variable instead of 3rd order wins.  This is definitely the correct way to go about it.  However I think if I took the actual wins curve and applied a predicted to actual transformation I think I'd end up with something that looks a lot like the 3rd order wins curve (the transformation would likely just increase the standard deviation).

Clearly up until this point the analysis has been focused on this year only, which is not the ideal way to look at the trade.  Clearly there is value to the moves (notably the Vasquez deal) that the Braves will get in ensuing seasons.  It's a little trickier to asses the future years using a similar metric, as it's hard to characterize the value of the payroll flexibility gained by picking up and average cost controlled outfielder and a prospect.  The question is whether the 10-15% that the Braves lost this year in playoff probability can be gained back in the upcoming seasons because of having to purchase less WAR on the open market.  Someone smarter than I am is going to have to attack that question.  My gut says it'll all come pretty close to even in the end, but that could be Christmas leftovers just disagreeing with me.