Editor's note: Please welcome Steve to Beyond the Box Score. You can also find his writing about the Cardinals at Play a Hard Nine. -TBB

Inspired by Neyer's Monday piece on Matt Holliday, I thought now was an appropriate time to take a look at the developing LF market.  The top 3 sluggers still available according to Rallys FA Tracker all play the position and have been linked to contracts of varying length/magnitude in recent days.  With those rumors in mind I wanted to investigate how likely each player would be to produce surplus value on said contracts.   In this particular case I turned to a simple simulation I developed.

I originally developed the simulation to look at one year roster construction, with the intent of gauging how likely certain team compositions would surpass various WAR totals; however, the same logic could be applied to looking at the length of a contract instead.  I originally posted an article about the simulation at my other digs here.  Give that a read if you want some of the details.  The cliff notes version is that it's a simple Monte Carlo that takes wOBA and UZR/150 projections, generates a simulated wOBA and UZR/150 from a truncated normal distribution centered on the projections and given a user input SD, and then calculates RAA for offense and defense.  After the fact I convert RAA to WAR based on simulated playing time numbers.

The age old saying of garbage in garbage out applies to most (all?) simulations, and this one is no different.  That being said, this section on the inputs affects the results section way more than the underlying simulation itself.  I used CHONE projections for wOBA (calculated off of the 2008 figures published by Tango here) and my own for UZR/150 (available here).  For offensive aging I used MGLs newly published aging study (available in its entirety here).  As you'll see in the results I used two different aging curves for comparison sake, the traditional delta method applied to 1995-2008, and the delta method applied using JC's playing time restrictions (10 years in the league and 5000 career PA).  For defensive aging I leveraged Jeff's previous work.  I also ran excursions based on varying playing time/injury assumptions.  Each player has a perfect health (PH) run with constituted 625 PA and 115 DGs, and they have an injury run (INJ) that has a 10% chance of losing half a season to injury for each simulation run.  If you want to throw stones, now would be the appropriate time...

All of the following charts are the WAR CDFs based on the respective simulation outputs.  We'll go in order of increasing contract magnitude, which means leading off we have Johnny Damon, who is rumored to be looking for something in the neighborhood of 3/39M.  All of the charts have WAR along the x-axis and probability of achieving at least that WAR on the the y-axis (the more interesting number in this case is 1-p however, as that will be equal to the probability of surplus value). [UPDATE as Justin points out I botched the words here hard core.  It is actually the probability that the player will accumulate less than the corresponding WAR.  Words on the CDF] 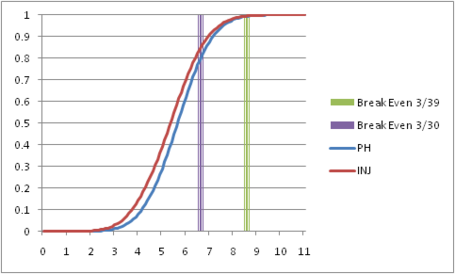 Batting second in our lineup of LFers is Jason Bay, rumored to be looking at a 4/60M deal from the Mets 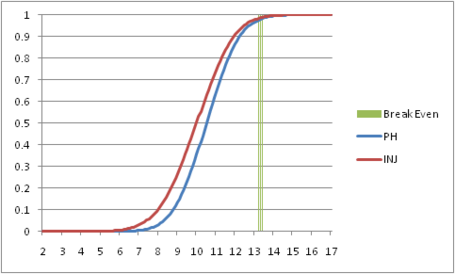 Not a pretty picture, with only a ~2% chance of having surplus value.  However, there are those out there that think that Bay's defensive number have been hurt by the Monster and/or aren't as bad as they seem.  With that in mind, I replaced my projections (-9.5 UZR/150) with those from CHONE (-4) and reran the simulation.  Here are the results. 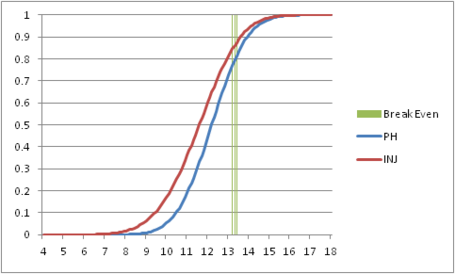 While I wouldn't call it a good deal, it would be a little more palatable with a 15-20% chance of having surplus value.  Now what happens if we slow the aging curve by using the JC-like aging curve with the better defense assumption (a best case combination). 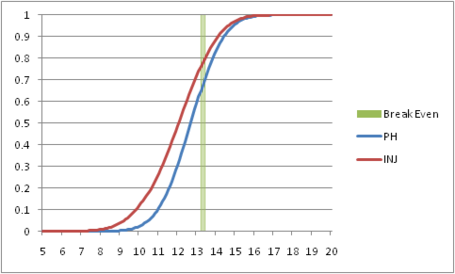 This pushes Bay to a ~25-35% chance of having surplus value.  Still not a good deal, but it's the best we'll get with this set of input parameters.

Now on to the biggest money deal, Matt Holliday.  When I started this analysis I was working under the 8/128M deal that had been floated around (and referenced in the Neyer article).  A smaller 5/80M would only be better for the signing team.  First the standard delta method 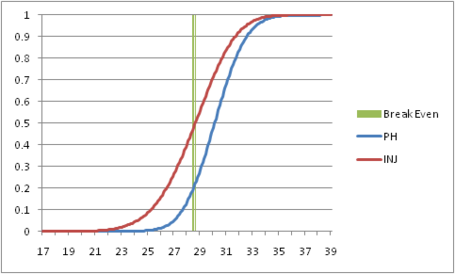 This is a bit shocking to me.  I wouldn't have thought that Holliday would have such a good chance to have surplus value (~50-80%), and the JC aging curve only makes it more likely (80-95%).

A lot of his value over the 8 years is tied to his defense, especially relative to the other players we saw, but there is probably enough disagreement about his defensive value to run another experiment.  Also of note, the linear decrease I used to age defense never had him "fall off a cliff" over the eight years.  With that in mind I altered the aging factor on defense to be less linear over the course of the deal, and reran using the standard delta method.  Here's the chart 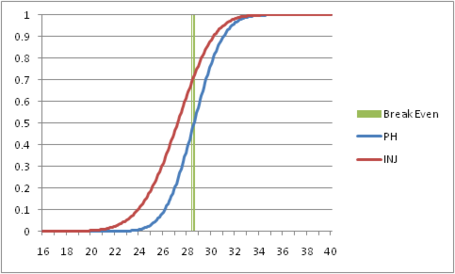 So we're now at 30-50% chance of surplus which is more in line with my gut (not that my gut is worth anything).  Even with this more pessimistic (realistic?) prediction, he still offers a better chance to have surplus value than the other two options presented.

If I were a team in need of a LFer (and clearly my favorite team is) I would prefer to snag Matt Holliday at the newly reported 5/80M over either of the other two options.  Bay becomes an interesting option only if you are inclined to disagree with UZR (or think Fenway affects UZR), and Damon just isn't very interesting to me at all.

After going through the process on these three guys, I think I like the methodology, but there could be some tweaks on the input side.  I know I could do better with aging defense.  I mentioned earlier that it was truncated normal, and in that arena I need to be very careful about the upper and lower limits (especially wOBA).  Either way, do ya'll think that graphs like these are worthwhile to look at or is are there too many variables to mess with to get a clear picture?  I'm all ears (which is an ironic statement considering how long winded my first post here was)