The 2010 Hall of Fame Ballot, Graphically

Share All sharing options for: The 2010 Hall of Fame Ballot, Graphically

The induction class for the 2009 Hall of Fame will be announced on January 6th.  While Erik already looked at the most attractive new candiates for the Hall of Fame, I thought I'd take a tour through most of the rest of the ballot.  Like Erik, I'll be using a mainstay graphical tool here at BtB, the WAR graph.  The Excel template I threw together to make these figures can be found here.

In all graphs, we're plotting Rally's WAR for individual seasons ranked best to worst.   The "HoF Zone" is a range that spans from the average Hall of Famer (specific to either pitchers or hitters) down to the 20th percentile Hall of Famer.  Thanks to Sky Kalkman (the inventor), Jeff Zimmerman, Tom Tango, and Dave Studeman for driving the development of this graphical approach.

Let's start with pitchers, because there aren't as many on the ballot and the story is pretty straightforward. 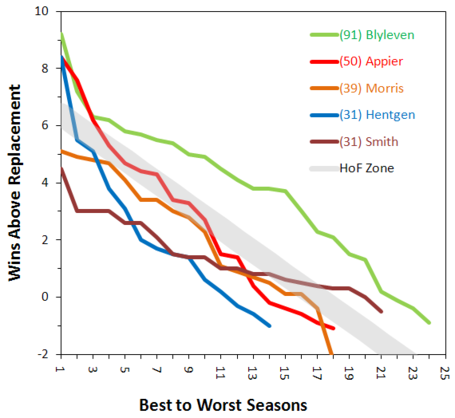 There is absolutely no excuse for Blyleven to not receive unanimous support for the Hall.  But you knew that.

Kevin Appier is the surprise to me, though.  He's gotten very little attention in his first year of eligibility, but his 10 best seasons seem extremely worth of hall of fame consideration.  In fact, his peak three years rate as above-average compared to hall of fame pitchers.  He deserves consideration.

Jack Morris is the guy who will probably get a lot more attention than Appier.  He's close, but at best, he's in the 15th percentile or so of Hall of Famers.  Given all of the other eligible candidates who were much better that this, I tend to think that this isn't good enough.

Pat Hentgen had one really nice season.  Lee Smith was a closer...I'm not sure if this is the best way to evaluate a closer, but it certainly doesn't make him impressive.  Mike Jackson's line, not shown, is similar to Smith's.

Position players are below the jump

There are a lot of position players on this year's ballot, as is typical.  I've opted to break them down into three sets of five.  Here are the top five, to my eye. 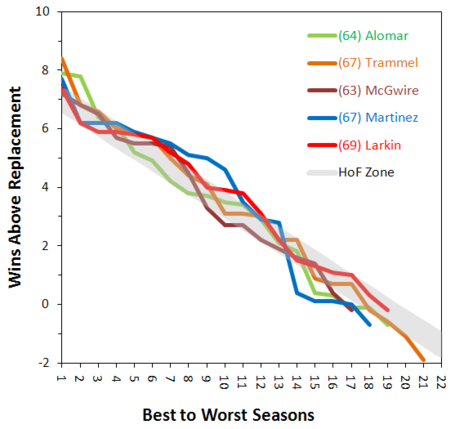 This graph is admittedly kind of a mess.  But the key point I'd emphasize isthat all five players are more or less in or above the Hall of Fame zone throughout most of their careers, meaning that their seasons rank very favorably with other already-inducted Hall of Fame players.  There's enough criss-crossing that I wouldn't argue with any ranking of these players.  I tend to put the most value on the top-10 seasons, and up-weight the top-5 seasons relative to others.  So, for what it's worth, I'd put them: Alomar, Trammell, Larkin, Martinez, McGwire.  But Alomar could just as easily be ranked last of the five.

Barry Larkin was my favorite player growing up, and so I've spent some time arguing his very strong case elsewhere.  The only guy among these five that I think one could have a legitimate issue with is Mark McGwire, and it's entirely dependent on how you weight the steroid issue.  To me, the steroid issue is one to focus on moving forward (prevention and abolition).  But given all the uncertainty regarding how much of an effect performance enhancing drugs actually have on performance, and the fact that we probably still do not know a major fraction of the players who actively made use of the drugs, my preference is to not factor it into decision making...except perhaps as a tiebreaker.

Here are the next five: 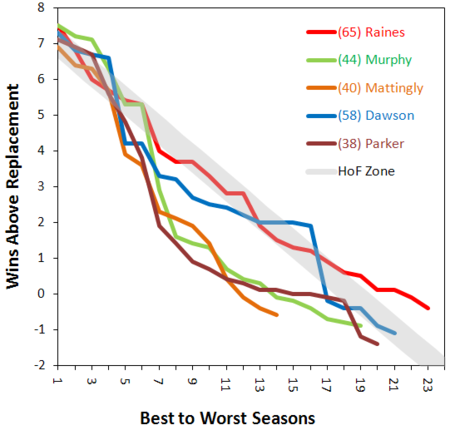 Given all the hoopla surrounding his candidacy, I actually expected Tim Raines to look better than he does.  I still think he's a good candidate and deserving of induction, but he's a below-average hall of famer.  That's not a bad thing.

The other four--Murphy, Mattingly, Parker, and Dawson--are interesting in that they all peaked well, but fell off badly once you get past their five or so best seasons.  My feeling is that Mattingly didn't peak high enough, and Parker fell away too quickly to deserve induction.  Dawson and Murphy are borderline cases.  Murphy had the better peak, posting above-hall of fame average numbers over his best three seasons.  Dawson had better longevity.  As I write this, I'd probably give Murphy the nod and not Dawson, but tomorrow I might go the other way, whereas two days later I might say neither or both should get in.  I really don't know.

Here are five of the remaining hitters.  Others, like Todd Ziele and Eric Karros, aren't shown as there's just no case to be had. 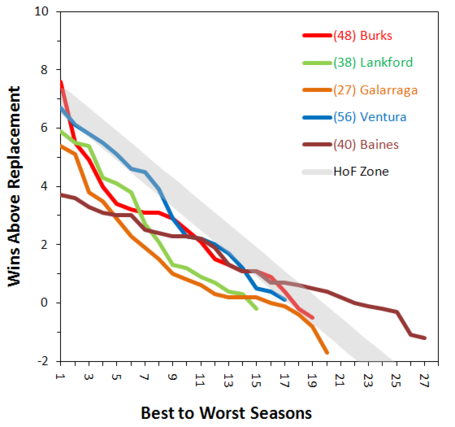 Ellis Burks looks a lot like Pat Hentgen--one really spectacular season, while the rest of his career is squarely in the Hall of Very Good.  Robin Ventura hasn't gotten much attention, but he's basically skirting the 20th percentile of Hall of Famer's at the bottom of the HoF Zone.  I'd probably say that he's very close, and better than some guys already in the hall...but that he's wouldn't quite get my vote.  Baines played forever thanks to the DH, but was never a good enough player at his best to warrant consideration (yes, the DH hurts him here).  Finally, Ray Lankford and Andres Gallaraga serve as nice examples of players that aren't really candidates for the Hall of Fame, but nevertheless had fine careers and should be celebrated.

Maybe I'm a big hall kind of guy, but my ballot would look like this: Blyleven, Alomar, Trammell, Larkin, Martinez, McGwire, Raines, Appier, Murphy.  In that order.  And maybe Dawson too.