The White Sox just signed J.J. Putz for 2010 at $3 million. They're getting closer turned set-up man. Putz had some elbow clean-up done recently, but I gather there were no structural issues.

Putz used to throw in the upper 90s, which complemented a nasty splitter. And not only were those fastballs very fast (they still are), but he mixed two- and four-seamers. A hot riser and a hard sinker. Niiice. Putz also throws a hard slider (upper 80s) and a slow-ish curve (mid-upper 70s), but not very often -- particularly the curve.

Take a look at his speed charts, going back to 2007 (seasons divided by vertical white lines). 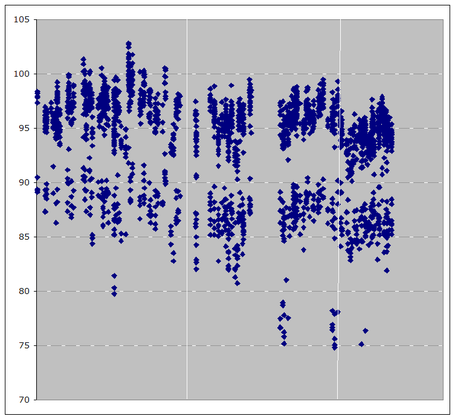 You can see the lack of curveballs at the lowest end of his speed range(s). While Putz did regain some velocity during his abbreviated 2009 season, he has not shown the type of speed he was known for in his prime. Still a hard thrower, still has that effective, bat missing, ground ball inducing spliiter.