Past Performance Does Not Guarantee Future Gains

Share All sharing options for: Past Performance Does Not Guarantee Future Gains

I know faithful BtB readers would never fail to discount attrition risk or regress expectations to the mean. I know this because you're a smart group of people. But I also tend to accept the presumption that cognitive biases sneak up on us when we're least cautious. And the more "enlightened" we come to think of ourselves, the more we might potentially open ourselves to blind spots.

Take free agent valuations. These things aren't easy, especially when you consider that few of the publicly available prediction models have released projections for the 2010 season. So much of the commentary you see out there is relying on guess work. And can you fathom when cognitive biases might play their most prominent role? Could it perhaps be when the analysis is unmoored from rigorous statistical data?

Take Pedro Feliz (that's "Pete Happy" in English). The Phillies held a team option on his services for the 2010 season: they could exercise it and pay him $5 million to stay in the City of Brotherly Love, or they could decline the option and pay him a $500,000 buyout. Thus, the marginal cost of a year of sterling defense and head-desk inducing limp noodleism was $4.5 million. Yesterday, the Phillies declined Feliz's option and will likely seek to fill their hot corner needs from the hot stove.

How can we tell if this was a good move?

One place many have begun their analysis is FanGraphs. There, they have calculated each player's value in terms of WAR. They have also taken the extra step of multiplying each season's WAR figure by the price of a marginal win on the free agent market in a given year to get a sense of how much each player was "worth."

Here are Feliz' values for the previous five seasons:

And because I know you like a good graph: 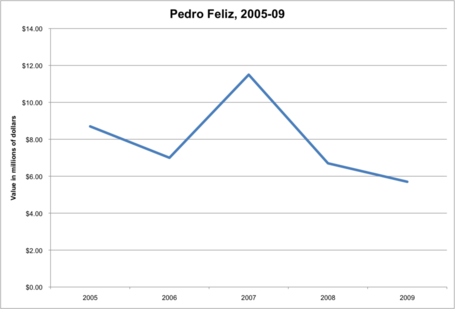 As you can see, Feliz has been in decline. However, he has never been worth less than $4.5 million in any season in the last five years. Thus, the Phillies were wrong to decline his option, correct?

Well, no. First, we have to come up with an estimate of Feliz' value if he plays 162 games. Then we have to discount that figure by the probability that he gets injured. Playing next season at age 35, and with this probability is increasing year-over-year at a faster rate than it ever has, it is likely that there is at least a 10% chance Feliz spends a month or more on the disabled list. There is also a non-zero chance he suffers a career ending injury, etc.

So if our original estimate is that Feliz' value will be approximately $5 million in the event that he is healthy, it is almost certainly true that the Phillies made the right decision in declining his option.

This conclusion is reinforced once we take the necessary step of evaluating the other options. The two most commonly discussed are Chone Figgins and Adrian Beltre.

Here's a typical discussion of Figgins, who is rather difficult to value:

So with all this information at our disposal, I ask – what’s the value of Chone Figgins? Since 2007, FanGraphs calculates that he has been worth a total of $50.9 million, with a high of $27.4 million in 2009 (while getting paid a paltry $5.78 million). But with Figgins finally eligible for free agency, would you pay Figgins $50 million over the next three years?

Figgins' FanGraphs values are even more all over the map:

And here's a graph: 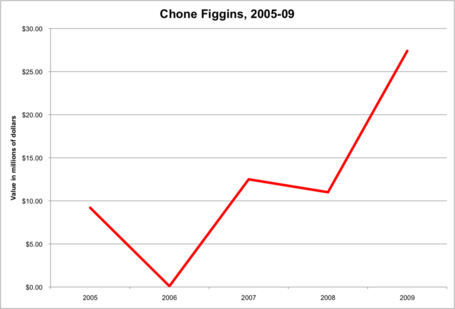 Eyeballing that chart, you are likely willing to discount his outlier season of 2009, despite the fact that it is the most recent. It was fueled largely by a career high 16.3 fielding runs above average (by UZR), and perhaps you don't trust UZR's year to year fluctuations (motivated by good reasons).

So let's say you throw out his outlier 2006 and 2009 seasons, and expect him to be worth between $9 million and $12 million. We'll split the difference and say $10.5 million. Again, that is if he is healthy. He will play next season at age 32, so perhaps the risk there is lower than it is with Feliz.

But does the bigger fluctuation in value (think of a beta value) make Figgins worth less than his expected value? Possibly. If teams are looking for production certainty, they may be willing to pay a premium. However, we ought to wonder whether the fluctuations are related to something inherent about Figgins, or are simply a combination of luck and circumstances.

In any event, if the Phillies are going to pay what is essentially par for the third baseman, perhaps they would like to guarantee a higher level of production than that which Feliz can be counted upon to provide.

The important thing is not to allow the ready availability of FanGraphs numbers, which are evaluated in hindsight, color your expected valuations. To do so is to fall prey to a common set of cognitive biases.

And, of course, if they want to make the ballsy play, they'll go after the riskiest but also probably the best option: Adrian Beltre.