Ever since I have seen and used Pitch F/X data, I have been trying to grasp the difference between the umpire-called strike zone and the textbook strike zone.

The official rule book definition of the strike zone has changed over the years.  Since 1996, the offical definition according to MLB is:

On TV or on MLB Gameday there is a nice box that shows this perfect strike zone.  After working and observing PitchFX data for a while, the strike zone is not that perfect and the following is a look at the basics of the called strike zone and how the batter handedness effects it.

When looking at the strike zone home plate umpires call, we must remember the following points:

3. For the foreseeable future, computers will not call balls and strikes.

With this understanding, the umpire's strike zone generally consistent in size. Umpires' zones should be investigated, but not for evaluating the umpires. Instead, their strike zone tendencies should be known so it can be seen how well pitchers and hitters adapt to the different zones, which is a great part of the game baseball. Gamblers, who have more at stake than team pride, have been tracking umpire stats for years to see how they affect game scoring.

I have looked at a few cases of suspect umpire calls (Milton Bradley, Shane Victorino and Zack Greinke) and in each case the umpires did nothing different than what they do every night. They call their own unique game and the hitters and pitchers that adapt first usually will have an advantage.

The strike zone that umpires call isn't a perfect box as shown on MLB Gameday.  When an umpire positions himself behind the catcher, he moves to the inside part of the plate (depending on batter handedness).  This adjustment can be seen the following two images.

Because umpires are positioned to see the inside pitch, they call balls and strikes more consitenly on the inside versus the outside.   Besides the lack of consistency on the outside part of the plate,  the strike zone shifts inside between 0.2 to 0.4 feet depending on the batter's handedness.  The shift can be seen in the following image of 3000 called strikes vs LHH.

Note:  The Gameday zone shown is 1.5 feet off the ground to 3.5 feet tall and extends 1 foot in each direction from the center of the plate. 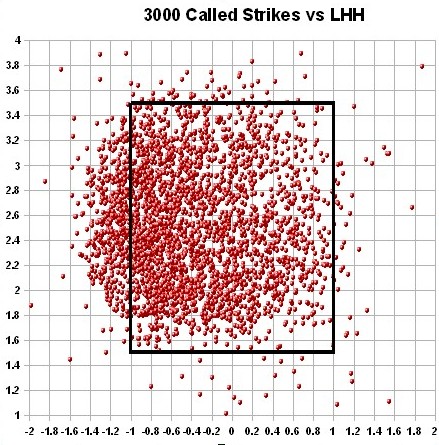 Finally, the called strike zone is circular in shape as can be seen in the preceding image.  Whenever it is said that the umpire is not calling the corners, it is probably because the corners aren't generally called.

To deal with all these aspects, I created a strike zone that is shaped like a cross (since corners aren't called, I won't count them) and shifted to the inside part of the plate.  A circle would be ideal, but the cross is easier to display in graphics and use when running queries on the original data in SQL

I tried several ideas to position the zone and I decided on the following method.  I found, through trial and error, the zone where there was the same percentage of pitches out of the zone called balls as there were called strikes in the zone.  Initially, I created the zones by eyeballing one of the previous plot and then I adjusted the dimensions until the percentages were close.  Here are the dimensions, the percent of balls and strikes in and out of the zones and 4 images depicting the zones against actual called balls and strikes. 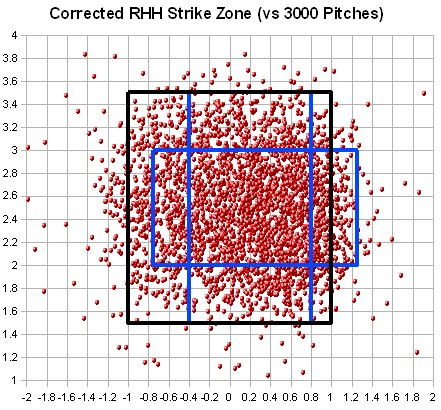 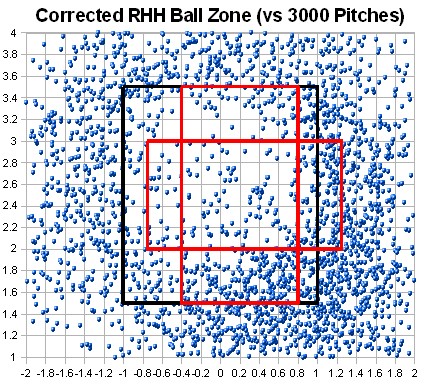 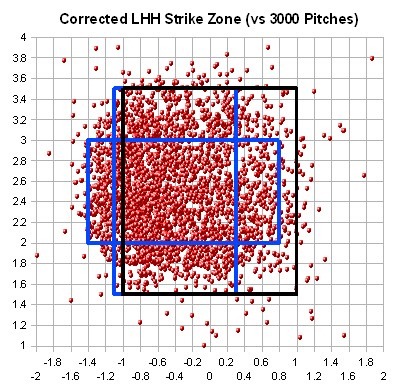 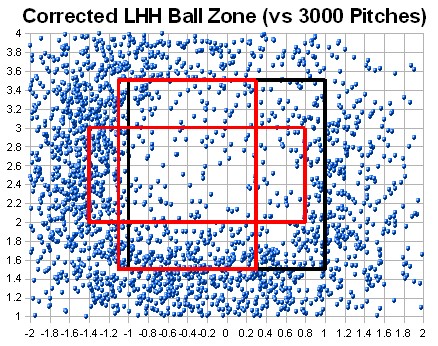 The zone for left-handed hitters is shifted even more inside than that for right handed hitters.  I have tried to find a good explanation for this shift and have had no luck.

Previously I did a similar study that didn't adjust for handedness and found zones that, at best, had a 79%/85% Strike/Ball split.  I think the 85%/85% split is much better, especially since it is that way for two separate zones.   If you want the queries to use on your own dataset, here is a document that contains them.

Using these 2 zones, I created 3 boxes using the smallest, average or largest extents of the cross for use in other queries. Here are the extent boxes, along with the percent of called balls and strikes.

Please let me know if there are any questions.  I will be looking at zone difference depending on pitcher and batter handedness in the next installment.