Share All sharing options for: Andy Pettitte vs. Pedro Martinez: WAR by Age

With just a few minutes before first pitch in Game 6, let's take a look at how the two starting pitchers (neither a stranger to the postseason) have performed by age. 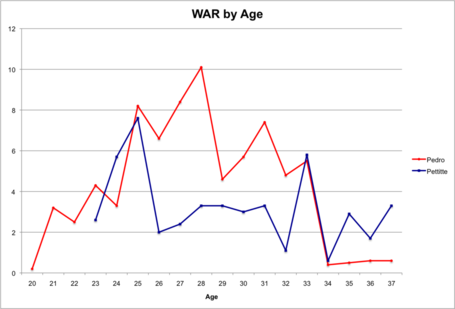 Note: all WAR data taken from Rally's database, except 2009, which is not yet available from Rally and so comes from FanGraphs.

Pedro's career has followed a much more predictable trajectory, while Pettitte's career has been more of a drunkard's walk. Last weekend, I called Pettitte slightly above average, but he has been much more consistent in recent years than his opponent this evening.

Their fastballs are similar: Pettitte's (89.0 mph average) clocked in just a tick above Pedro's (88.5) this season. Both liberally mix in cut fastballs with plenty of movement and neither is reluctant to throw an off-speed pitch for a strike. In many ways, they are mirror images of each other: Pettitte the lefty version of Pedro.

It ought to be a good matchup.