Newbies on the 2010 Hall of Fame Ballot

Share All sharing options for: Newbies on the 2010 Hall of Fame Ballot

We've hit that (not so) fun time of the year when the weather starts to get really cold and the Hall of Fame debates start to heat up. These are some of the new guys on this year's ballot, some of these players are solid choices, others...not so much. Take heart Crime Dog, Jim Rice set a whole new standard! 12 years from now, you too could be Cooperstown bound. 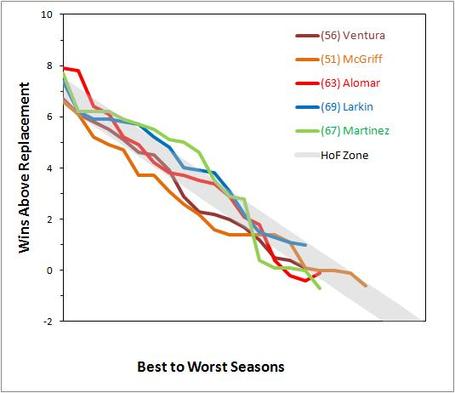 My inclination was that Alomar would have been the best candidate out of the five but as it turns out, I was wrong. Larkin will probably get overlooked initially no thanks to injuries; hopefully he gets more support than Alan Trammell has received in the past. Both are worthy, in my opinion.

As for Edgar Martinez, I thought that whole non-position positional adjustment would have really hurt, but he has a solid case for the Hall, DH and all. If relief pitchers can get elected, why not Gar?

Finally, since we're nearing Festivus, I would like to air a grievance that has been aired by many a Tiger fan. Lou Whitaker has more career WAR (70) than any of these players, and yet was bounced in his first year of eligibility. Where's the flippin' justice, man?!?!

Thanks to Justin for the template for this graph, and Rally for his WAR database.