Tim Lincecum eeked out his second straight Cy Young on Thursday. While the voting was close and, to some, controversial, he's a deserving winner.

The Giants eeked everything out of Lincecum's campaign, with its 225 innings ranking 3rd in the NL and 8th overall. He didn't exceed his workload from 2008 (by two innings) but he did show some wear-and-tear, starting as early as a missed start in September. That extra rest was needed to recover from back spasms.

Following Lincecum's penultimate start of 2009 (against the Cubs on 9/25), I posted about a sudden drop in velocity, coming in his third start following the brief shutdown.

Should the Giants Back Off Tim Lincecum? - Beyond the Box Score
Zambrano peaked at 96.3, Zambrano was strong, just outside the top third of his peak range. His average fastball speed (93.8, with or without sinkers) was 7th out of 73 starts in average fastball speed (two- and four-seam combined). It was also he best average fastball velocity of 2009. So, there was probably nothing "in the air" that night pushing The Freak's speed numbers down. Lincecum topped out at 94.3 - that's his lowest peak on record. He averaged 91.4 mph. Throw out the two-seamers and he's at 91.6. Out of Lincecum's 77 PITCHf/x starts, that's dead last.

Lincecum's Cy Young campaign had one more stop on October 1. Hardly a stop, seeing how each of his final two starts were in AT&T Park. Another thing that didn't stop was that decline in velocity.

Despite warm weather (at game time), Lincecum's fastball velocity remained sub-par. He throws (at least) two fastballs, which I'm splitting them into "fastballs" and "sinkers". The so-called sinkers just tail more, and occasionally have some more downward movement (actually less backspin or "rise"). Call them what ever you like. Sometimes he sinks the ball a little more and sometimes he cuts it a little, but I'll stick with two groups. 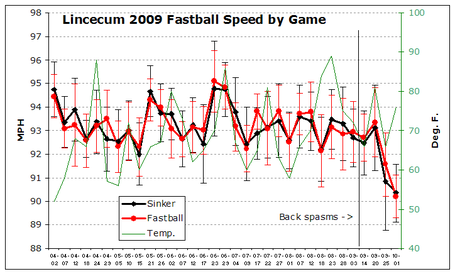 Why the weather and the split of fastballs? I wondered about the effect of pitch selection on the range of speed on his combined set of fastballs, seeing how he threw a few more sinkers than fastballs during the final start. The aforementioned warm weather, meanwhile, can not be blamed for the apparent drop in speed. It doesn't look like the sinkers are to blame, either. They're not a likely culprit to begin with, as they're thrown as hard as the other fastballs.