The 2003 Florida Marlins featured a sensational group of young starting pitchers. The attention-grabbing youngsters were Josh Beckett, Carl Pavano, Brad Penny, and Dontrelle Willis. Their ace from the year before, the also-young A.J. Burnett, was sidelined in the spring with Tommy John surgery, and did not participate in the pennant run or successful World Series bid.

After the major parts of the 2003 Marlins were shipped off, these five young pitchers were scattered at different ends of the Earth. As A.J. Burnett finally gets to show off his stuff in the World Series, I have search high and low for tales of these star-crossed hurlers, doomed to wander the countryside.

Here is a composite chart featuring the WAR stories of each of the five pitchers since 2002 (beyond that, there be monsters!). 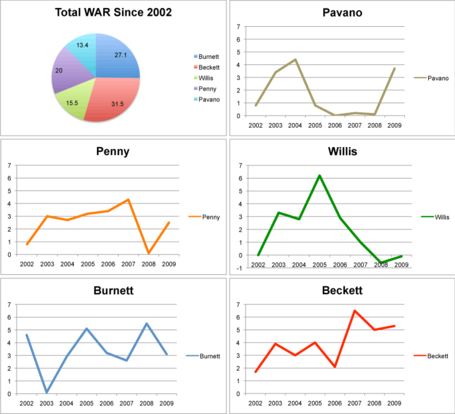 It ought not to be surprising that Beckett has been the most valuable, in terms of WAR, of any of these five. He is the best-known, and he is the only one with a World Series ring outside of Florida so far.

None of these pitchers is quite like any other. Willis was remarkable for his windup and delivery, as well as his ability to induce grounders. Beckett was always an overpowering flamethrower in the Texas mold. Penny, at his most effective, relied on decent control and pitcher-friendly home parks. Pavano's trick was always to keep the strikeouts outpacing the walks just enough so that the home runs didn't bite him too hard.

But Burnett was the one whose stuff most often made observers look agog. He is a rare bird capable of striking out hitters as easily as he induces ground balls. His fastball has late, heavy action, and his breaking ball, when located, is one of the nastiest in the league.