Share All sharing options for: Zack Greinke and Tim Lincecum by LOWESS

Today it was announced that Tim Lincecum would join Zack Greinke as this year's second Cy Young award winner. Both had excellent seasons. While Greinke likely has the edge due to Lincecum's more favorable league and park, both exhibited no real weakness. Both struck out more than a batter per inning, both walked fewer than three batters per nine innings, and both allowed fewer than a dozen home runs.

After Greinke's furious start, there was some concern that his superlative season might be lost as he bumped slightly in the middle of the season. Lincecum, by comparison, appeared to be more consistent: he had no string of dominance as convincing as Greinke's April, but neither did he have any periods in which he struggled.

I decided to calculate each pitcher's single-game FIP and xFIP (based on batted ball data from FanGraphs) and run it through the R CLI. I then applied a LOWESS regression to each pitcher's season to give an idea of how each pitcher's fortunes changed from month to month. Here they are, by FIP (click to enlarge): 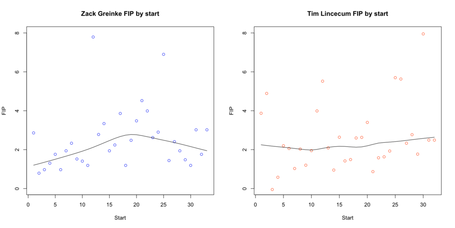 xFIP comparison below the jump. 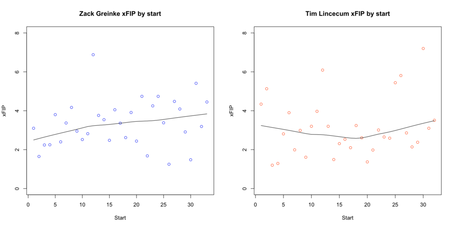 Interestingly enough, because of Greinke's higher FB percentage (40.5% to Lincecum's 33.3%), Lincecum's xFIP LOWESS regression is lower than Greinke's for most of the year.

It's worth noting that there is a great deal of noise in all of these plots. What LOWESS does is apply a local polynomial regression; you can think of it as an improved moving average. For those who are curious, I used a smoothing factor of 2/3.

Is this a helpful way to visualize a pitcher's season? I'm curious what you think!