Beyond the Box Score will be starting a new series, Reward Retrospective, that will look at past awards (MVP, Cy Young, ROY, etc.) that pique our interest and examine them with some of todays metrics. I hope you enjoy these looks back at various players and seasons.

In 1985, I was 10 and never knew that it would be the last time I would see my Royals in the postseason. As a hardcore Brett fan, I wanted to go back and see if he was deserving of the AL MVP in 1985.

Here is a table of top 5 AL MVP vote getters and their basic stats for the '85 season:

Now here is a comparison using Rally's WAR data (thanks to Sky for the original idea and Justin Bopp for the graphic): 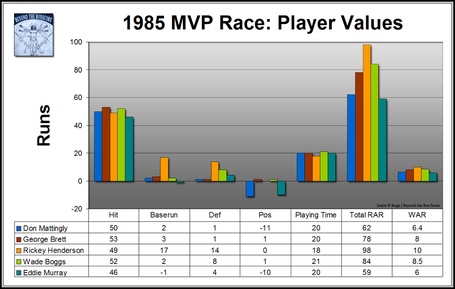 Using the traditional stats, you can see why Mattingly won. In the AL, he was 4th in homeruns, 3rd in batting average and led the league in RBIs (he had 21 more than Eddie Murray, who was second). The other top vote getters all trailed in at least one category. Brett and Boggs had lower power numbers. Murray had a much lower batting average. Henderson had neither the power nor the average. I see perfectly why the voting happened the way it did 25 years ago.

Looking at Rally's WAR numbers, you see a completely different story. Between the five players, the runs contributed by their hitting only differentiated them from one another by 7 runs (46 to 53). In other categories, however, the separation was more pronounced. Rickey Henderson had both superior base running and defense compared to the other four. Rickey got such a boost from those two categories that he accumulated 3.6 more WAR than Mattingly and 1.5 WAR more than Wade Boggs. The voters where looking at the right team, but wrong player.

Well, Brett was not deserving of the award in 1985, but neither was Mattingly.  Hats off to Henderson--at least he got an MVP award five years later with the A's. The voting in 1985 was a perfect example of baseball's past emphasis on RBIs instead of understanding a player's overall contribution.  Twenty-five years later, many of these same voters are around and continue to use inferior statistics to influence their voting.  I guess you just can't teach old dogs new tricks.