Share All sharing options for: Was Joe Mauer Streakier than Jimmy Rollins?

That some players are streakier than others is, for most baseball observers, nothing short of self-evident. Some guys get hot and stay hot only to descend into the depths of a terrible slump that can last for a month or more. Other guys go to the park, go one-for-three with a walk and a double, go home, eat a steak, and hit the sack, day in and day out. Some guys are up-and-down prima donnas, other guys are paragons of workmanlike consistency. Right?

Who's streaky? Maybe Jimmy Rollins. He started the year off on a terrible note. He hit .207/.241/.293 through the end of April. He eventually heated up and was a fire-starter for Phillies down the stretch. Ergo, streaky.

Who's consistent? Joe Mauer. Immediately upon returning from injury, he hit like his life depended on it. I mean, dude can mash, never takes a day off, professional ballplayer, baseball intelligence, intangibles, and consistency. AM I RIGHT!?

Not so fast. Consider this comparison chart: 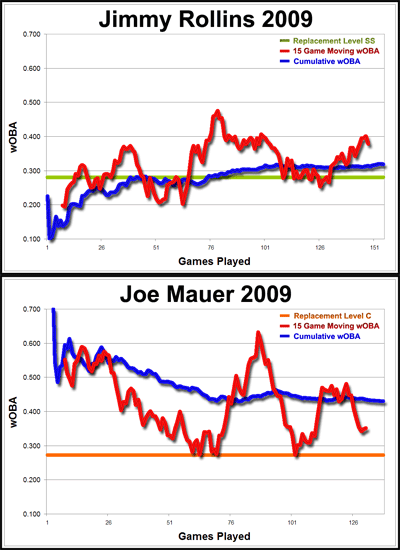 Using game logs on baseball-reference, I have calculated cumulative wOBA through each game of the season. I have also calculated the wOBA for each 15 game period (note that this is the true 15 game wOBA, not the average of the wOBA's of the 15 games).

It's important to note that the 15 game wOBA doesn't tell you much other than how a guy did. In other words, we can't say that Joe Mauer was actually a better hitter in mid-summer than he was in late May. But it does tell us something about whether a guy was performing well or not. It also remains possible that he really was a better hitter during that time, or that he was doing something different--we just can't be sure.

Look at the chart for Rollins: 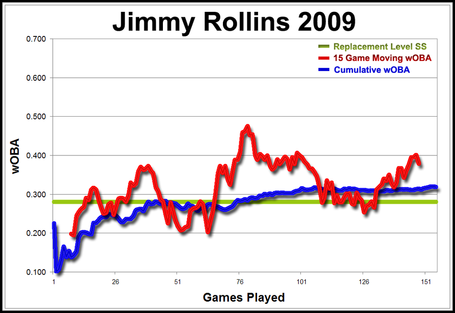 Notice that he does in fact start out very poorly. But as you follow the 15 game average, you'll notice that he fluctuates less than Mauer. Compare: 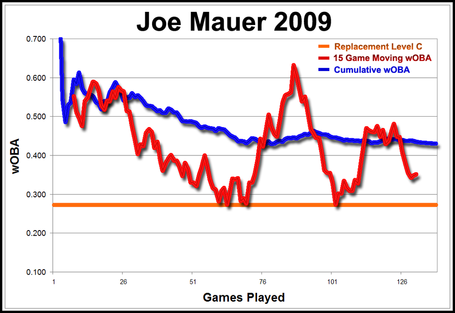 What could account for this? Listening to commentators, it was a foregone conclusion that Rollins was streaky (despite his defense and speed, which as we know are never streaky...) while Mauer was consistently excellent.

I have a theory. Players only count as streaky if they have a slump on an objective scale. If you live in the rarefied air such that your wOBA average is right around .400, no one is going to notice if you put up a .300 for two weeks. But if you normally sit around league average, and put up a month of .200 wOBA, everyone is going to notice.

Of course, I'm putting to one side their defense. Both of these players have strong defensive reputations. Additionally, and unrelated to their defense, they both won Gold Gloves this year. If we did the same for WAR, assuming we could somehow rate defense on a per-game basis, it might be that the graphs would look more stable.

One final thought remains. Look at the cumulative wOBA totals. Notice how they start to level out. On the one hand, it should be a good reminder of the importance of a large sample. The 15 game averages are all over the place, but by the end of the season for each of these guys, the numbers start to level off.

But it's very important to remember that even with these seemingly stable numbers, we can't be certain they represent true talent. As Colin Wyers has pointed out, even when a player has 300 PA, we still need to regress his wOBA almost 50% to the mean. However, that does not mean that, with 600 PA, we do not need to regress at all to the mean.

(Special thanks to Justin Bopp for the nice graphs.)