Share All sharing options for: wOBA to WAR Conversion Spreadsheet

Update 2 11/10/09 - 4:20 MST - In column B of the spreadsheet there was some extra calculations that added 2 extra runs to all calculations.  I think they were an artifact from once wanting to add WAA.  They have been removed and the spreadsheet is corrected.

Update 11/10/09 - 4:00 MST - An error was found in the spreadsheet.  I will post a corrected version later tonight once I get a chance to make the correction.  Sorry for this inconvenience. -Jeff

Last Friday, Justin ran an article on free agent first basemen with their 2009 wOBAs. Justin and I determined that it needed a baseline wOBA for reference. The overall league averages can't be used because each position has its own run adjustment depending on its difficultly. For example, 2B is much harder to play than 1B, so if Chase Utley and Ryan Howard have the same wOBA, Chase's value is worth more since he is playing a more difficult position. Fangraphs has a great explanation of the process for each value in the WAR calculation.

I created a spreadsheet that has the projected RAA, RAR and WAR for each position assuming a certain wOBA.

For the spreadsheet I made the following assumptions:

Here are the wOBA values for each position needed to get league average and replacement level production:

Examples for using the spreadsheet. 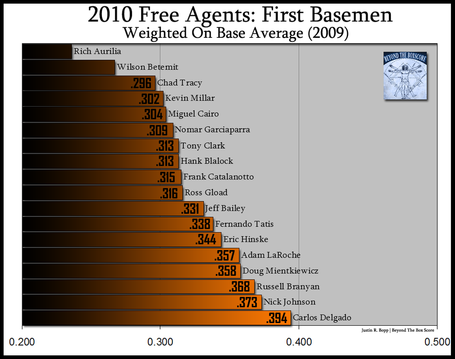 Values are in the graphic, but no reference for meaning. Instead, if we look at the preceding table, we can see that a 1B needs to hit .350 for league average production. There are only 5 free agent first basemen that meet this criteria (LaRoche, Mientkiewicz, Branyan, Johnson, and Delgado). Also we can find that 6 players contribute at below replacement level when batting (Garciaparra, Cairo, Millar, Tracy, Betemit and Aurilia).

Example 2 - The Royals are considering having Jose Guillen be the permanent DH next season. What does his wOBA need to be to contribute positive WAR for the Royals?

This answer is actually pretty simple. He needs to bat a wOBA of 0.329 since there is no defensive adjustment to add. Currently, Bill James, the only person out with projected wOBA, has Jose projected to hit a wOBA of 0.321. Jose's production isn't enough to get DH replacement level production.  Then by going back to the spreadsheet, it can be seen that if he gets 700 at bats he will have a -0.5 WAR.  The Royals should be looking for another DH if they are hoping to have at least replacement level contribution from the DH spot.

I hope that you find this spreadsheet useful, and let me know if you need any further explanation.