Share All sharing options for: The Cincinnati Reds WAR Path: The Great Years 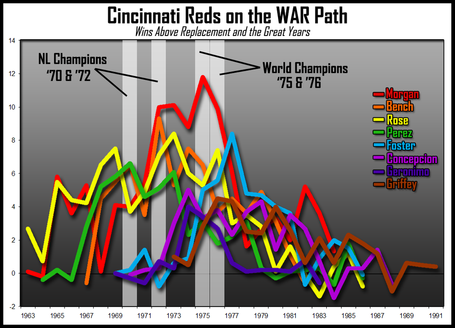 The MLB Playoffs are a bittersweet experience for any fan that hasn't seen success in some time, especially a Royals fan like myself. Of course, it's great to see good teams play in meaningful games, but holy hell it's hard to find a lot of passion about teams with more money, more brains, and better players. I hear myself whining already.

So, with machine-like precision, the Playoffs come and go, and the great teams build upon their legend, and fans of bad teams stand by with strained statistical interest. The hardest part is hearing about "rebuilding mode" for ten, fifteen, twenty(!) years, all while seeing team after team have their prospects and trades coalesce at the same time to make a run at a Series win.

That said, when Sky hands me the data for the 1975 Cincinnati Reds, it's with little passion that I approach this chart, regardless of Mr. Posnanski's wonderful words and wisdom about the team. I just can't bring myself to care. I don't care about the Reds. I don't hate Joe Morgan. I don't love Pete Rose, or idolize Johnny Bench. I just don't care.

I hate needing to admit being apathetic towards this amazing team. I even asked for advice from my friend and  BtB/G&C co-author, Walter, and the best he could come up with was, "What is there to say? They sure were a great team!" And he likes the Reds!

It is with this cold approach to the team that it all becomes clear. Maybe they were the greatest of all time. Maybe not. I'm not qualified to answer that. What I see is a group of great players, and three of the best of all time, all near-peaking in the same period of time.

Morgan's best season was one of Bench's 3rd best seasons. Rose had just peaked in 1973 and was just beginning his descent in those Series-winning '75 and '76 seasons. It's hard not to notice that all of these players peaked in between 1970 and 1977, and that one's peak and beginning descent was followed with another's peak. And so on.

Clearly, there's a lot more to say, but most of those words have already been said. However, we can take a moment to observe how one team had all the right players, peaking at or near the exact same time. Perhaps there's a team in the playoffs, this year, that we'll look back at some thirty years from now and notice the same thing? Perhaps there's a GM out there that can observe how to construct a roster of similarly-peaking players and bring back some playoff joy to those without?