Chart of the Day: Playoff Odds based on BtB Power Rankings

Share All sharing options for: Chart of the Day: Playoff Odds based on BtB Power Rankings

The BtB Power Rankings are based on an estimated, theoretical winning percentage (I call it Team Quality Index, or TQI) for each team based on their component statistics and an adjustment for league quality.  If we use TQI as an estimate of a team's true talent level (i.e. their quality), we can use those numbers to predict how teams will fare against one another in the playoffs (I used the odds ratio).  Here are those numbers: 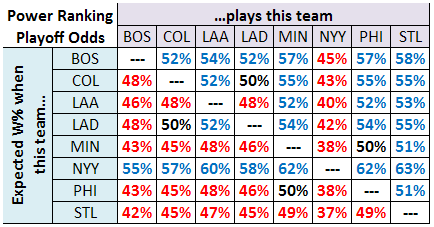 The Yankees lead our power rankings, and so it's not a surprise to see them favored against every team.  The most even matches in the playoffs are between the two NL West teams (Rockies & Dodgers), as well as between the Phillies and the Twins.

"On paper" playoff predictions (prior to yesterday's action...):

A final review of the regular season power rankings, featuring the data upon which above table is based, is forthcoming. :)