Twins vs. Tigers: Graph of the Day

Share All sharing options for: Twins vs. Tigers: Graph of the Day 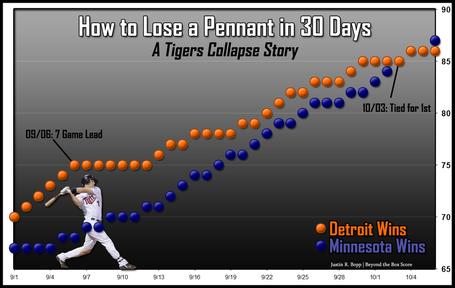 The place won’t die. That’s how it should be, I suppose. That’s how it goes in horror movies. The killer gets burned, drowned, chopped in half, run over by a car, crushed by a tree, shot 12 times in the chest … but the killer keeps coming back, more and more ticked off with each near-death experience.

Places can be said to have a sort of charm to them, at least if you're from the upper midwest and too polite to say that something (stinks). This is fortunate, considering the geographic location of the place. But for me (or any one of a thousand glossy-eyed idealists who will offer the requiem), it is moot. Because I was never 8 years old there. And never a Twins fan. I'm a tourist, not just as a traveller staying in a suburban chain motel, spending my few dollars, and rocketing back down I-35 towards home in four days time. It's because I was 19, and it could have been Wrigley Field on opening day with Petco weather and AT&T Park food, and I could have had a fabulous time, and I could have found happiness in section 210, and married and settled down in Eden Prairie, and it still wouldn't matter. Home is a concept reserved primarily for youth, and to someone, many someones I would imagine, the Metrodome as a baseball park was home, and the end was nigh. Tonight, that end loomed several times.

Only ... not so much, as it turns out. But even if the AL Central tiebreaker is the last real hurrah, Disney would have gotten their money's worth on the script rights. No one cares what happened in the Championship Series in Major League.

Speaking of which, the untold story of that movie was exactly how badly that Clu Heywood and the Yankees must have tanked to have set up that tiebreaker playoff with the Indians in the first place. We are affected by no such blinders (as I learned by watching the game with a lifelong Detroit fan) and it's pretty easy to track just how quickly their pennant race went horribly wrong. No one wants to be the foil in someone else's heroic struggle. Much better to be the one doing the overcoming than the one overcome. But there are no Yankees in the lowly and humble AL Central, so the Detroit Tigers end up playing the part. 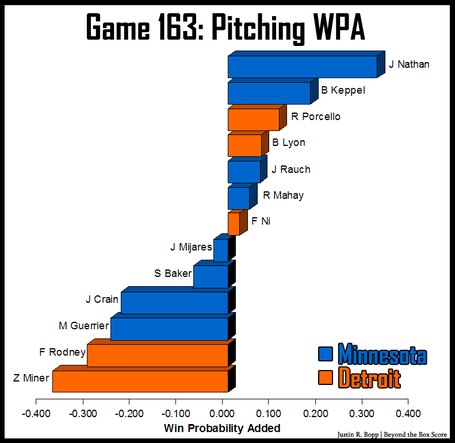 And so on the subject of heroes, we look to the individual game WPA (Win Probability Added) for the startling 13 pitchers used in the game, and again without going really all that far Beyond the Boxscore (tm) to see once again, that Wins, Losses, and Saves are bunk. Neither the biggest hero, nor the biggest goat, got any sort of decision. Well, okay, Miner did get a blown save. I just finished reading four recaps of this game from some of the most respected and popular sports authorities, and only one mentioned Nathan. None mentioned Miner, but all of them mentioned both Bobby Keppel and Fernando Rodney extensively, usually in their own paragraphs.

The WPA chart also hints at the positive elements of proper bullpen usage, as LOOGY Ron Mahay made a not insignificant contribution - by facing one batter, Curtis Granderson. He struck him out.

The sort of context that WPA depends on makes it of extremely limited value when evaluating players on a season or career long basis. But in a one game sample? With no tomorrow for both a team and a stadium? Why the heck not? In the terms of this being it's own sort of mini season, statistics don't have a chance to even out. Luck doesn't normalize.

Most importantly, it was fun to do this chart. And fun to watch that game. If you didn't experience a thrill from what we all had the fortune to experience last night, you're either a Detroit Tigers fan ... or it's time to consider a new hobby. I don't express awe well in writing, and this game was fully deserving of it. All I can say is that I hoped you watched it, and I hope you got the same feeling I did.