Share All sharing options for: The (Not so) Big Bossman (Jr.): Graph of the Day 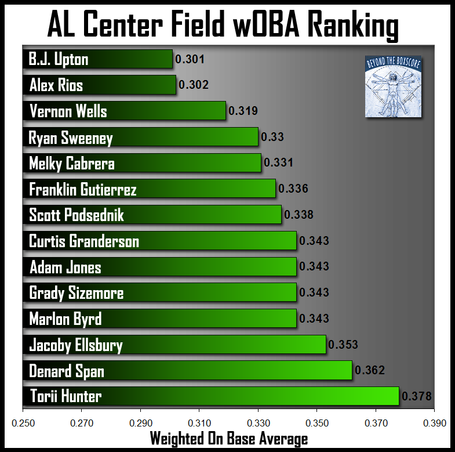 In 2007 and 2008, Upton posted wOBA’s of .387 and .354, respectively. This year, that mark has plummeted to just .298. Among batters taking at least 500 trips to the plate, Upton has the fourth-worst wOBA in the game. Only light-swinging middle infielders Edgar Renteria, David Eckstein and Orlando Cabrera have provided less value with the lumber. Per Batting Runs (a park-adjusted measure of offensive production), Upton has gone from +27.2 runs above average in 2007 and +15.3 in ‘08 to a wheezing -13.2 in 2009.

I'm really not sure if any of you heard about this, but B.J. Upton hit for the cycle. It was the first cycle in all forty-four minutes of the Rays history.

Let's quickly break down said history. The first act of their history was a team with a mission ... to make the best expansion draft selection in Major League history (some guy named Bobby Abreu), and then to immediately trade him to the Phillies for practically nothing.

The second involved, of course, the Hit Parade (McGriff, Canseco, Castilla, and Vaughn), who were roughly a combined 250 years old, giving up Randy Winn in a trade for the right to negotiate with a manager (Lou Piniella, of course, in probably the single worst trade of the last 50 years that didn't involve simply cash), and that thrilling 4th place finish (one of two times they didn't finish last, the other being 2008).

Then of course, the music swells, and the underdog begins to turn it around, starting with the fleecing of the Mets in the Victor Zambrano for Scott Kazmir trade. It's easy to keep track of what act you're in - just look for a corresponding uniform / team nickname change. Of course, it culminated with the emergence of the stars of their show: Carl Crawford, the aforementioned Kazmir, the tragic hero Rocco Baldelli, the renegade executive Stuart Sternberg, and the two kids who were sure to follow and set the world on fire: Delmon Young (the talented but unfocused hothead), and B.J. Upton. They figured the nucleus of talent would help them compete. It did. And B.J. was a star. 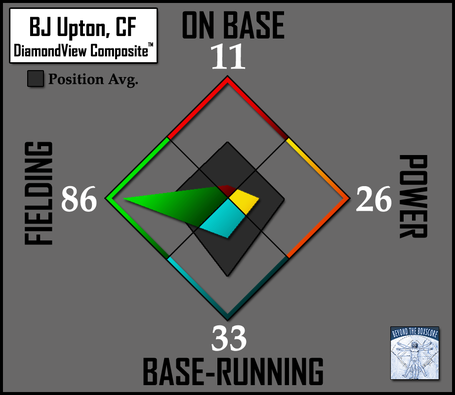 Has it really only been a year since B.J. found his place among the best centerfielders in the league? Does it feel like he's 30 to anyone else? Just how badly have those combination ankle / shoulder injuries slowed him down? Were the home runs two seasons ago and the Beltan impression in last year's playoffs a fluke?

In order: Yes, Your call, A lot, and To some degree. The ankle issue is interesting. The baserunning DVC score is way down from last year (when he would have been a 71), but the fielding score is almost exactly the same, both in percentile rank and UZR (10.3 to 10.5). The shoulder is probably telling us the real difficulty at the plate (despite a weird increase in LD%). And the decreased walk percentage on a team that doesn't preach aggression at the plate is probably a sign of a known hole (or abyss) in his current swing that is covering a good deal of the strike zone. As little fun as it is to say this - we're going to have to wait until 2010 to know for sure. But players don't usually show non speed related skills before the age of 27 that magically disappear in their mid 20s (non Mark Teahen division).

One thing, no actually two things are for certain: The cycle is still a silly and arbitrary way of allocating praise. And 2009, injury-free or not, will more likely be remembered as the year that B.J.'s younger brother Justin Upton surpassed him. And likely their two places will never be reversed again.