Kevin Towers: The End Of An Era

Share All sharing options for: Kevin Towers: The End Of An Era

Floating around the rumor mill lately are reports that San Diego Padres GM will be fired after the season is over.  Towers spent the last 14 seasons as the GM of the Padres, and over that span San Diego has made the playoffs 4 times, including their only World Series appearance in 1998.  Assuming Towers will indeed lose his job, the Padres record over his Tenure will be 1107-1159, for a .478 winning percentage.

Of course, Jeff Moorad and the new Padres ownership group probably isn't terribly interested in the 1998 World Series run nor the back-to-back division titles in 2005 and 2006.  As ESPN is wont to remind us, the world of professional sports is a "What have you done for me lately?" world.  The Padres 74 win season this year certainly looks great compared to their 2008 win total of 63.  However, their run differential suggests a talent level closer to 66 wins.  Regardless, the talent on the field right now leaves something to be desired.  The question must be asked, though - what did Towers do to deserve getting fired?

The Padres were a successful team by any rational measure from 2005-2007, averaging 86 wins and reaching the playoffs 2 times, narrowly missing a third in a legendary single-game playoff for the wild card.  In 2008, the team won 63 games.  What changes in on-field talent led to this massive drop-off?  First, let's look at the major contributors from the 2007 team and their production in 2008. 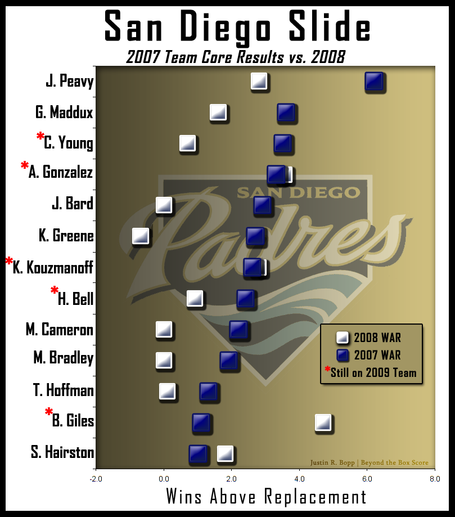 Nearly every significant contributor from the 2007 team saw a significant drop in production or left the team through free agency.  Jake Peavy couldn't follow up a tremendous 6 win 2007. Greg Maddux succumbed to age.  Chris Young lost most of his 2008 to injury.  Mike Cameron and Milton Bradley left to free agency.  Old standby Trevor Hoffman slipped to nearly replacement level.  Khalil Greene absolutely collapsed.  Overall, the team lost over 16 wins of production from a core group of 13 players from the 89 win 2007 team.

Nobody stepped up to fill the gaps, either.  The only position players not listed above to go above 1 WAR were Jody Gerut (3.2 WAR, no longer on the team) and Edgar Gonzalez (-0.4 WAR in 2009).  Similarly, no pitchers stepped up to fill the gaps. Only Cha Seung Bak managed over 1 WAR in 2008, and he was injured through all of 2009.  No team will be able to sustain a loss of 16 wins in production from their core and be able to compete without some contribution from new players.  The Padres didn't bring in any big time free agents and weren't able to fill gaps with younger players.

This seems to suggest the Padres have not been able to infuse young talent into their team.  There just haven't been players ready in AAA to come and fill in for aging or injured major leaguers.  This isn't to say there's a lack of trying.  Matt Antonelli, Nick Hundley, Paul McAnulty, Wade LeBlanc, Cla Meredith, Josh Banks, and Justin Germano saw significant time in 2008 and were all 25 or younger.

Unfortunately, the Padres did not get production out of this group of players.  This inability to replace the lost production from 2007 led to the dismal 2008 season.  Things are looking up this year, as they graduated Kyle Blanks and Everth Cabrera, who have combined for 1.8 wins in 2009 in under 600 PAs.  They unloaded the expensive contract of Jake Peavy and picked up four decent prospects, giving a much needed boost to a 25th ranked farm system.  They are a young team, with an average pitcher of 27 years old and average batter of 28, both below the league average.

However, no stars have been born out of these young players.  The only truly elite player on the team is Adrian Gonzalez, as the only player with 3 or more wins above replacement this season.  Also, the farm system doesn't have much in terms of elite prospects.  With Kyle Blanks now in the majors, that leaves Mat Latos as their only top 100 prospect, and he ranks in the bottom half.  They are deep, though, and they have one of the premier players in baseball to build around.  They should have the money to rebuild with how low they've kept payroll.

Unfortunately for Kevin Towers, his farm system let him down in 2008 and 2009.  It appears that the Padres are still a couple years away from making a run at the playoffs in a suddenly strong NL West.  Without the elite chips to build with, Jeff Moorad isn't willing to wait around for a relic from the old ownership to win.  Moorad could go in any number of directions, perhaps the most intriguing of which would be assistant GM Paul DePodesta of Moneyball fame.  As for Towers, he has a solid reputation around baseball, and likely will not have to wait very long to find another job.