Andy Pettitte is Slightly Above Average

Share All sharing options for: Andy Pettitte is Slightly Above Average

Andy Pettitte is, at this point in his career, a slightly above average pitcher. That, of course, is quite valuable. Much of his value is tied up in his ability to throw lots of innings at an above-average, but not elite, rate. Let's take a brief look at his career so far.

Andy Pettitte was born in Baton Rouge, Louisiana, but spent much of his childhood years in Deer Park, Texas (just outside of Houston). He attended San Jacinto College (which counts among its alumni also Roger Clemens, Mike Gonzalez, Jesse Crain, Matt Albers, and Nick Stavinoha; go Gators!) for one year before being signed by the New York Yankees as an amateur free agent in 1991.

Other than the three years he spent in Houston from 2004 to 2006, Pettitte has been a Yankee his entire career. In that time, he has been consistently above average.

Interestingly, he has never posted an FIP worse than league average. Here's a comparison between Pettitte and league average FIP over the course of his career: 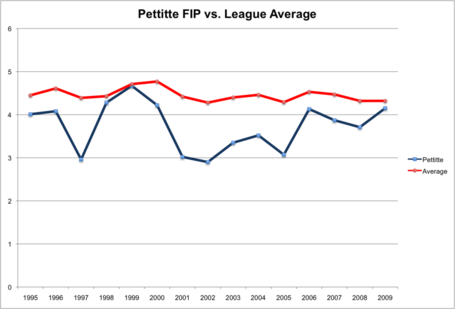 He came pretty close there in 1999, but his 4.67 FIP bested the league's 4.71 mark by a hair's breadth. It's interesting to note that Pettitte's numbers track the movements of the league average pitcher--at least the ups and downs--pretty closely. Perhaps we should call Andy Pettitte a cyclical pitcher. He is at least a bellwether.

Pettitte has done it primarily with four pitches: fast ball, cutter, change up, curve ball. His cutter has traditionally been his strongest offering, and this year was no exception. According to FanGraphs' pitch values, his cutter was worth 2.5 runs above average per 100 pitches.

Pettitte displays a small platoon split. For his career, right handed batters have hit .270/.329/.400 against him, while lefties have notched a .271/.318/.393 line. The real difference comes in the number of strikeouts, as he has a 19.2% K rate versus lefties and just a 16.7% mark against righties. Similarly, he walks fewer batters against his fellow southpaws: 5.7% against 7.9% facing righties.

It is interesting the splits have not manifested themselves in the triple-slash line. My guess is that his cutter allows him to induce more ground balls from righties than lefties, counteracting in part the K and BB rates. His GDP rate against righties is 2.8%, while it is just 1.8% against lefties.

Television announcers will no doubt tell you all about how Philadelphia's lefties struggle against southpaws--but don't be fooled, Pettitte has plenty of weapons against the right-handed batters as well.

This is Pettitte's eighth career World Series. His signature stare will once again show up on prime-time television.