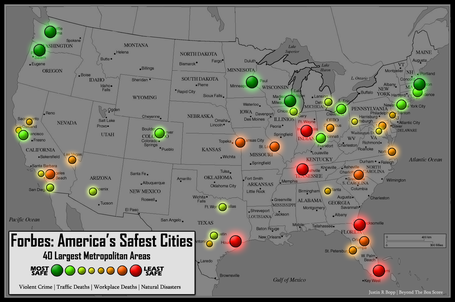 Forbes.com recently unveiled its 2009 version of "America's Safest Cities" based on statistical measurements of violent crime, traffic deaths, deaths in the workplace, and distance from natural disasters in the forty largest metropolitan areas in the United States.

They might have considered "sports fan quality" in an effort to save time, but if "violent crime, traffic deaths, deaths in the workplace, and distance from natural disasters" doesn't conjure up the 2004-2009 Kansas City Royals / Kansas City Chiefs for you, you probably live in Florida and hate sports.

Me? I'm starting to get a leeeeetle jealous of Boston. We all know about the "Decade of Boston," (thanks Simmons), but now they're one of the top 5 safest places of all major metropolitan areas in the country? What's next?