How the Economy Will Affect Salaries

Share All sharing options for: How the Economy Will Affect Salaries

It is possible that the recession in the United States has already ended. Yesterday, the Commerce Department announced that U.S. gross domestic product (GDP) had grown in the third quarter at an annual rate of 3.5%. It marked the first quarter of GDP growth in more than a year. What does this have to do with baseball?

This past offseason, many commentators noted the effect the financial panic had on the free agent market. With the uncertainty in the economy, below-market contracts were given to players like Bobby Abreu and Orlando Hudson. Evaluating the value of a win is never easy, but perhaps we can make some inferences about player salaries based only on GDP statistics.

I have taken the yearly GDP data from the U.S. Department of Commerce, who compile the statistics. I took average MLB salary from CBS Sports. First, take a look at an X-Y plot of the two sets of data (click to enlarge): 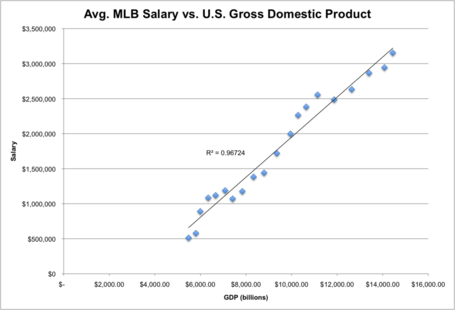 I have not adjusted any of these numbers for inflation, but it does not impact the outcome because each x-y datapoint contains data from the same year.

Notice the high correlation, reflected by the best-fit line's r-squared value of 0.97. Given only this data, it would appear that average player salary tracks annual GDP rather closely. There are, however, some outliers. 2003 is the year that falls farthest from the best-fit line; I don't have a good explanation for why it might be anomalous.

But this graph doesn't tell the whole story. To see why, look at this graph (click to enlarge): 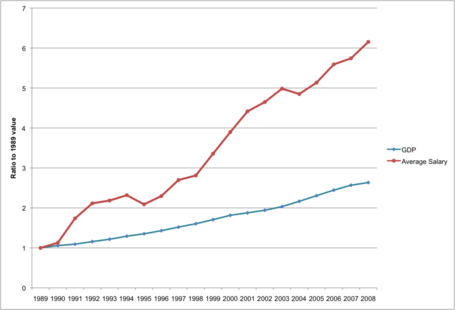 Here, rather than plotting GDP and average salary against each other, I have converted each year's data point to a ratio with the value in 1989. So, in 1992, average MLB salary was approximately twice what it had been in 1989. I did the same for GDP (meaning GDP in 2002 was approximately double what it was in 1989).

This graph shows how much faster than GDP average salaries have been increasing. With the exception of the strike-affected 1995 salaries and a blip from '03 to '04, it has been a slow, steep march upwards.

GDP, however, has been climbing at about a 3.5% rate consistently for even longer than this graph shows.

Much of the difference in the two series is explainable by the rapid growth in MLB revenues. However, the high r-squared value from the best-fit line in the first graph is pretty tough to ignore. So what conclusions can we draw from these two charts?

First, don't expect salaries to remain depressed for long. Although attendance has been down this year, teams ought to make their spending decisions based on next season's attendance. And while the possibility of W-shaped, or "double dip" recession is significant, it is much more likely that GDP will continue to grow, albeit at a slow pace.

If that is the case, teams looking for bargains may not find them, particularly since this year's free agent class is underwhelming.

What do you think? Will the economy, and salaries right along with it, recover into next year? Or are there likely to be some bargains again this winter?

After thinking about Matt Swartz's intelligent comments below, I have adjusted the numbers for inflation by using Consumer Price Index (CPI) numbers, which are freely available from the Bureau of Labor Statistics here.

All figures are now in 1989 dollars. Here's the updated chart: 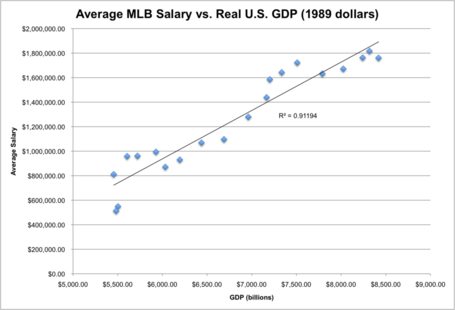 Please note the lower r-squared value. I made the mistake of assuming that multiplying both variables by a constant that changed from year to year would not affect the correlation. Of course, that's not true at all! As Matt put it:

However, an r-squared of .91 is still reasonably high. It is difficult to go much farther back than the 1980s (which we would like to do in order to add to the sample) for two reasons.

First, inflation during the 1970s and early 1980s was severe, and prices from that period are somewhat unreliable because of the rapid changes in the price level. Put another way, simply adjusting for inflation may not be sufficient.

Second, the landmark decision in Flood v. Kuhn, which effectively nullified baseball's reserve clause and ushered in free agency, was handed down in 1972. It would be several years before contracts ran out and the full effects of free agency were felt.

Here is the second chart, also now updated for inflation: 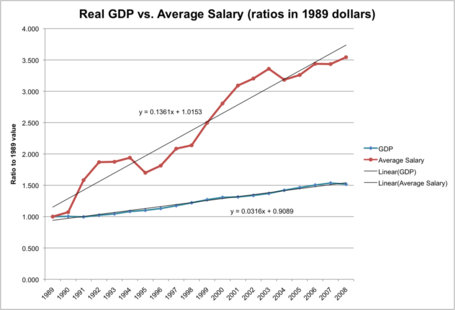 Note here that you can see much more clearly the impact of intrinsic baseball factors like the 1994 strike on the average salary level. You can also see the decline in real GDP that happened in 2008.

I have also added trend-lines, after thinking about Tom Tango's comment here. As the slopes of the trend-lines show, real (which is to say inflation-adjusted) average MLB salaries have been growing at something like four times real GDP. If predictive (and I'm not at all sure that it is), it would seem to imply a pretty big jump in salary for even a modest increase in GDP in 2010.