Cliff Lee vs. Cole Hamels: Graph of the Day

Share All sharing options for: Cliff Lee vs. Cole Hamels: Graph of the Day 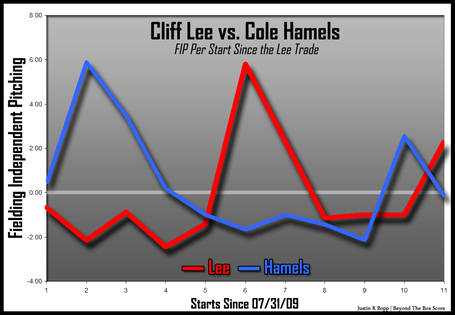 Only it really won't. From the Philadelphia Daily News, and only 8 days ago

First a disclaimer. The FIP (Fielding Independent Pitching) numbers featured above don't have the National League constant adjustment figured in. So if that ruffles you in any way, add 3.22 to the numbers you see above and wonder afterwards if it was worth the effort.

And of course, low FIP is good. High FIP is bad. So those jutting peaks of a mountainscape you see above are indicative of some pretty rough down the stretch performances. Of course, in seasonal FIP calculations, those numbers don't weigh as heavily as the good start - less innings pitched in all that. But in the case of a start by start basis, it works.

What's the most telling story that jumps out from this chart? That both Cliff Lee and Cole Hamels have had trouble in a couple of stretches since the trade deadline? That's really no surprise to anyone even remotely close to following the organization ... I'm pretty sure with just a little bit of digging we could find any number of stories decrying the end of both of them as an ace, dated within 6 weeks of each other. And probably a couple dozen cases begging Charlie Manuel to start J.A. Happ, Pedro Martinez, Joe Blanton, heck, probably Jamie Moyer as their #1 or #2. So that's been done.

Maybe some normalization as we get closer to the current date? Those numbers at the end are awfully close to their career stats. That certainly seems reasonable.

What I see (small sample asterisk firmly attached) is an odd pattern where neither player has managed to be consistently effective at the same time. And there's really no rhyme nor reason to it. Both players pitched against the same team in the same park with roughly the same lineup 7 out of the 11 times (also of note: a reason that using FIPx wasn't really necessary). There's no dramatic split issue to face. I find this sort of comforting.

The information we as fans have found wanting (the type of analysis that led us to be here, now in the first place) drastically overreacts to these sort of odd sways and shifts, constantly seeking some sort of sign that there is either doom or absolution on the horizon, every hit a sign of weakness, every strikeout one of invincibility. Things have a tendency to even out. Regression. Predictability. Comfort. It doesn't just make our hobby easier, it makes it possible. No correlation means no indication of future success, and that goes for both scouts and analysts. That means you grab 9 guys off the street and give them bats and gloves. That's a bad sport, albeit with some excellent contest prizes (fifth caller is the right fielder!).

But yet in a week it's like we play a different game. I have never in my adult lifetime been a fan of a playoff-bound baseball team. That alone carries it's own special brand of angst, I suppose, but in this particular case I am relieved. Because within the confines of a small series that will make or break the general perceptions of a team or player for decades to come, this sort of seemingly random statistical anomaly would absolutely terrify me. One only has to scan down the Phillies roster until you get to Chan Ho Park to remember the sort of brutal legacy that could be looming.

If this sort of short term meltdown happens in the playoffs for Cole Hamels, he might be safe. He still has some goodwill built up. But anyone else? You can imagine the headlines. Cliff Lee? Couldn't cut it on the biggest stage. A compiler. Joe Blanton? Too heavy. Poor conditioning made him wear down. (And seriously, isn't Joe Blanton like a year and a half overdue to give up like 9 HR in a game?) J.A. Happ? Charlie Manuel should've known better than to play a rookie in a big spot. Heaven forbid, Chan Ho Park again? I'm not sure polite society would allow the reprinting of what could spew forth. It would be lazy sportswriter heaven, and they'd pick his bones clean before morning.

And that's just one team. Pitchers (particularly the top 2 starters) bear an unbalanced portion of post-season success. And both of these guys do come packaged with the expectation of dominance, and anything less could be, if not eternally damaging, certainly nagging. More superstitious front offices could cost these guys millions.  So, as baseball fans we probably know better than to hope for cooler heads to prevail(especially, say, the Philadelphia, New York or Boston fans). But as a (hopefully) reasonable and pragmatic subset of baseball fan, it's probably a good idea to have the ice packs ready.