Share All sharing options for: Vladimir Guerrero and His Free Swinging Ways

Fangraphs has some measures of contact rate for a player's balls in and out of the strike zone. Even though I love Fangraphs, the information was not complete enough for that I wanted to see how the balls were hit (e.g. foul, out, hit). Also, all the pitches out of the zone were used at Fangraphs. I wanted to limit them to pitches just outside the zone by eliminating the number of called balls way out of the zone. For my strike zone, I used -1.2 and 1.2 for the x dimension and 1.5 to 3.5 for the y dimension.  For the expanded zone I increased the x dimension to -2 and 2 and the y dimension to 0.5 and 4.5.

Including Vlad, I looked at 2 sluggers from each team left in the playoffs. Also, I ran the numbers for all hitters. I used all available Pitch F/X data from all years since the sample size was small in some cases. Here are the results:

Besides the overall numbers here is a repersentation of where these pitches are located and the results. 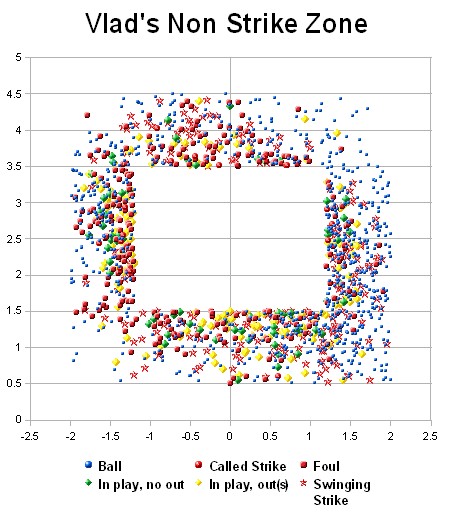 Vlad chases pitches all over the place, but has worse contact inside, then problem above and below and finally he is able to put the bat on the ball on the outside part of the plate.

I have a soft for Vlad and his free swinging ways, but maybe a few time he could help himself and his team and lay off a few of the pitches outside the strike zone.