I don't have the lineups yet and might not be able to run an analysis on them before the start of the game, but here is some general lineup information:

Joe Torre does not run out a very consistent lineup at all.  I went back into July and never found a lineup against LHP that was the same.  So I ran a run estimator using his last lineup against a LHP.  Here is the lineup and the estimated runs scored (against LHP):

I have read several places that the Dodgers are going to win the series because they will be able to hit the Phillies LHP.   I ran the run estimator against the lineup Torre ran in the first game of the Division series when the Cardinals Carpenter pitched, a RHP, and here are the numbers:

As you can see using this personnel group, the Dodgers should fair the same against RHP and LHP.  I am not for sure what Joe Torre is going to do, but he should consider batting Martin higher in the order, as all the top lineups from the estimator put recommend him bat first for maximum run generation.

The Phillies generally just run the same 8 players out and the pitcher.  They also use the same lineup vs RHP and LHP, so here is the projection against RHP and LHP:

The Phillies can't match the lineup of the Dodgers.  They face a significant drop in production against LHP because their two best hitters, Howard and Utley, are left handed.

For each batter, I generated a projected true talent level in OBP, SLG, and wOBA vs RHP and LHP.  For these values I used a weight of 1/3 for 2009 season regressed to 500 AB and 2/3 2009 Marcels projections.  Also, there has been shown a penalty for players coming off the bench to hit.  For all the non-starting players, their numbers show this penalty.   For the lineup information, I will be using baseballmusings.com's lineup generator to get a projected number of runs scored (data to be published after lineups released).

Mike Reilly - Mike is going to drive fan nuts for the game today.  He has a huge overlap on what he calls balls and strikes.  Because of this overlap, he must have hitter and pitcher guessing what is a ball and a strike.   Of the 72 umpires that umpired over 20 games in 2009 Mike allowed the 6th highest total in BB/game and the highest of all number of strikeouts per game (thanks to The Spread for this data).  Here is a look at his strike zone for left and right handed hitters: 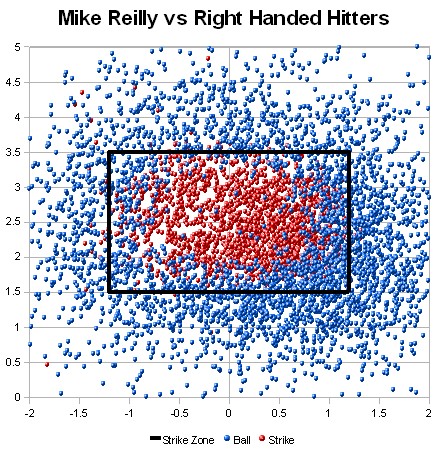 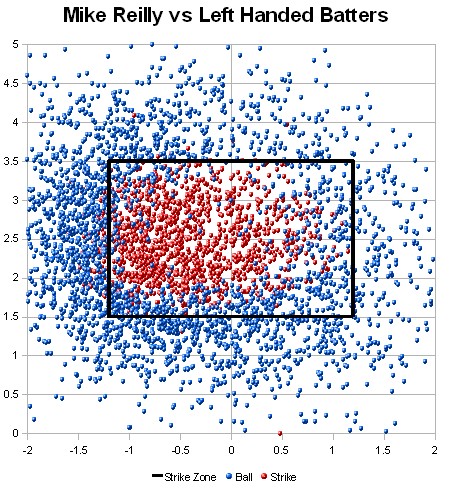