Larry Jansen passed away this last Saturday in his sleep (great article from his local newspaper on his life).  He is most remembered for the being the winning pitcher when Bobby Thompson "hit the shot heard around the world".  Larry played for nine seasons and had a nice career cut short by arm trouble.  He was averaging 4.4 WAR per season for his first four seasons and then his production dropped off as seen from this graph (data from Rally's WAR database): 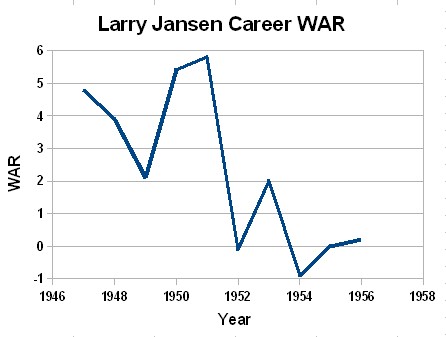 Even though I could not find any reference to Larry having arm problems before 1954, his production dropped off significantly in 1952 (less SO/9 and more BB/9).  He almost for sure was injured in beginning in 1952.

Larry career was similar to many pitchers because they have a few good years, become injured and never pitch to the high standard again.  Looking at Rally's ranking of 500 top pitchers of all time, Larry comes in at #350.  They are several current injury prone pitchers around him such as Kerry Wood (#352), Jake Peavy (#343) and Ben Sheets (#333) that could have similar careers to Larry.  I am not saying these three pitcher's careers are done, but you never know with any given player.  For 5 seasons, Larry was on top of the world and it pretty much came to an end within a couple of years.  Larry career should be a reminder for us to enjoy the players now because we will never know if we will see them play the same, or if at all, again.