Share All sharing options for: TargetView: New York Yankees - Graph of the Day 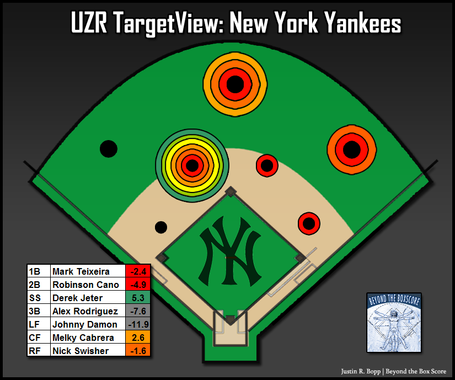 Did you know that Derek Jeter has the best glove of all Yankee starters?

One week ago today, I introduced the UZR TargetView method of comparing team fielding abilities. There, I outlined the purpose, development, and concerns with the method. Unwittingly, I chose the St. Louis Cardinals to unveil the idea.

Little did I know that one little black dot on my chart would be so prophetic. Two days later, Matt Holliday, with his -5.3 UZR/150 glory and all the grace of Beavis playing plate frisbee, botched a play in left field and all but doomed St. Louis' playoff chances. You can see that little dot taunting CardsFan there on the left. 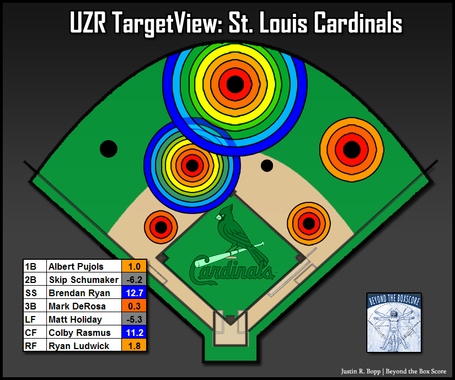 "Hello Cards fan. Was I worth it?"

Now, I'm absolutely not claiming any sort of TargetView curse. That would be silly. However, Matt Holliday was obviously one of the two biggest holes in the STL defense and, cliche or no, the ball does tend to find its way to those holes, does it not?

They're probably the best team left after a weekend of sweeps, but If I were a Yankees fan, after I bathed I would wonder what the one biggest hole on my team was. Johnny Damon in LF might be it.