I am finally feeling a better and have some use of my left hand so when I type, I am not pecking every key. I am going to make a few changes. I will go ahead and give the umpire information, but will provided links to the projected stats and defensive data. If I have time, I will then add the exact lineup and defensive information.

Ron Kulpa - I have Ron as being exactly middle of the road, rated 36th out of 72. His right handed zone is fairly symmetrical while the zone for left handers favors called strikes inside and not many strikes away. Of the 72 umpires that umpired over 20 games in 2009, he ranked 37th in runs scored per game, allowed the 26th highest total in BB/game and the 44th lowest number of strikeouts per game (thanks to The Spread for this data). Here is a look at his strike zone for left and right handed hitters: 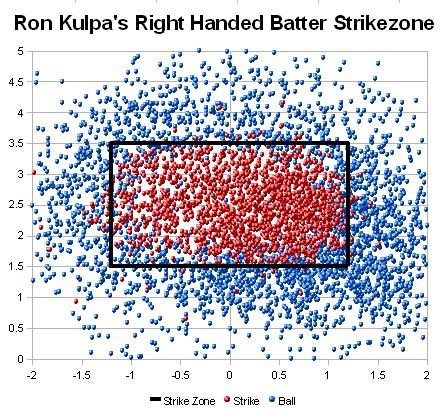 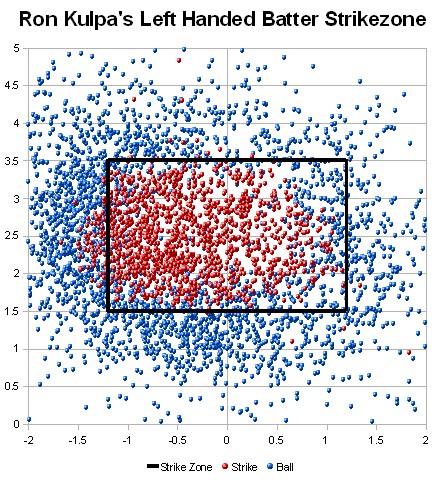 I will be using a regressed weighted average to get the UZR values for the starting players.

The player information is available at the NL Defensive preview article.

For each batter, I generated a projected true talent level in OBP, SLG, and wOBA vs RHP and LHP. For these values I used a weight of 1/3 for 2009 season regressed to 500 AB and 2/3 2009 Marcels projections. Also, there has been shown a penalty for players coming off the bench to hit. For all the non-starting players, their numbers show this penalty. For the lineup information, I will be using baseballmusings.com's lineup generator to get a projected number of runs scored (data to be published after lineups released).

Here are the projected values for the players on each team.