Share All sharing options for: Where's the Fuss? Juan Cruz

Juan Cruz is in the Type A penalty box. Good enough to get the top Elias rating, but not good enough for anyone to give up cash and a draft pick - yet. I'm not sure if that says more about the market, Cruz or the rating system.

I remember Cruz from his days with the Cubs - crazy live arm, but no clue where it was going. Now that's he's spent 2+ years doing nothing but work out of the pen, he's having success. He turned down an arbitration offer from Arizona, and now he's looking for work.

Cruz has come up as a possibility for the Cardinals, who are reluctant to part with a draft pick, He was mentioned as a closer candidate, over in-house guys like Chris Perez and Jason Motte (more on them here).

While Juan has added velocity in the last two seasons, his walk rate has gone up along with his K rate. His wildness, for me, does not make him a great choice for high leverage situations. He'll miss a lot of bats, but he'll also walk a half a guy per inning.

He does have some nasty stuff, however. Mainly a fastball/slider guy, he also works a change-up in. Cruz throws from two arm angles - almost all of his fastballs are released a little more over the top than his slider or change-up. From time-to-time, he will toss a heater from the lower slot, but it's a rarity. And almost all of his fastballs are four-seamers, but I do think the occasional two-seamer is in there.

The Spin Movement graph (in inches) has two insets - on the left are the release points (in feet) and, on the right, all the pitches on the spin movement plot. 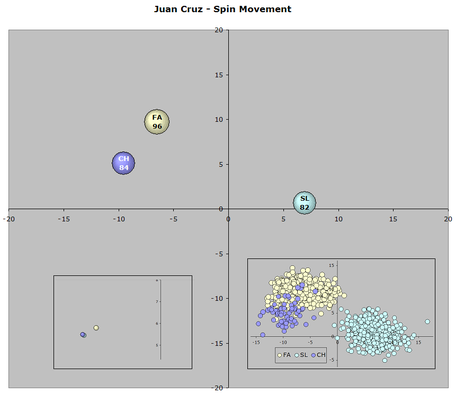 The flights paths put it all together. 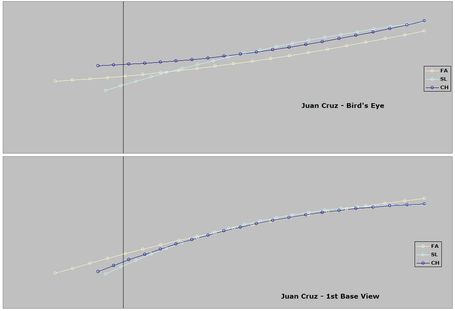 Cruz usually keeps the change-up in his pocket against righties, and lays of the slider a bit against lefties. Before delving into piles of numbers, let me apologize in advance :-)

I am working to boil down to some quicker, simpler/combined metrics. For now, you'll have to consume the whole lot. Not have to, but you will if you read on.

His control is suspect (IWZ is "in wide zone" which is ISZ + Paint):

Really, the issue with his control is the fastball. The slider and change are actually average in that regard. The fastball is below average, and hitters don't chase it out of the zone. That ratchets up Juan's B:CS ratio - average for a fastball is around 1.9 (sinkers and cutters are around 2.1 or so).

So far we know he throws really hard, with a moving slider, and out of two release points. Lefties get a change-up to round-out their diet. We also know Cruz tends to work out of the zone with the fastball, and not to the greatest effect in terms of balls in strikes.

What happens when batters swing at Cruz's stuff?

In Cruz's case, since he throws a lot of pitches out of the zone, his total bases per pitch (TBP) are impressively low, but should be considered in the context of the nkSLG - total bases per ball put in play (including home runs). The change-up nkSLG and TBP is absurdly low due to the infrequency of the pitch itself and the lack of contact. The fastball is slugged a little above average (that's for starters and relievers, too). His slider is slugged at about 160 points higher than average.

The slider looks like a pitch he'll make mistakes with. Cruz has a slight tendency to leave the slider in the fat of the plate, which could explain the apparent amount of hard hit balls (I would give my left arm for Hitf/x).

I could try and delve deeper into the question of fat sliders and contact, but we're getting into some low sample sizes here. And, I think what I've seen already is enough for me.

Cruz has a wicked fastball/slider combo that will open eyes anytime he throws. His control is questionable, and he's not an experienced closer. Yet, he is a Type A free agent. That means his cost is probably too high - even though he's going to be better than someone's closer, I think it would be too risky for anyone, Cardinals or otherwise, to swallow his price tag, cough up a draft pick and install him as a closer.