Share All sharing options for: Life After Pettitte Addendum

Andy Pettitte and the Yankees moved one step closer to finalizing their divorce Tuesday. New York may already be moving on. I've already discussed a gaggle of options for the Yankees 5th starter (or 4th, depending on where you fit Joba), but we've got more to talk about already.

The news also came about the signing of Jason Johnson to a minor league deal. If that wasn't enough for one day, Phil Coke is going to be stretched out and evaluated for the job, too.

So unless Pettitte signs, the No. 5 starter candidates are Phil Hughes, Ian Kennedy, Alfredo Aceves, Jason Johnson and Coke.

The first three were already covered (plus Dan Giese and Kei Igawa), so now I'll add Johnson and Coke to the mix.

Coke was impressive in relief during his September call-up. Johnson got some work with the Dodgers, starting in July. Mostly in relief, and mostly unimpressive.

Coke is a young, hard-throwing lefty. Johnson is a right-handed veteran who managed to throw as hard in 2008 has he had back in 2005.

Both have a distinct two- and four-seam fastball (F2 and F4), a slider (SL) and a rarely-used change-up (CH). Johnson also has a curveball (CU).

First thing to note is Coke's release point - he drops down on the change, or so it appears. I include a zoom of the scatter plot as an inset (same scale, btw) for reference as well. 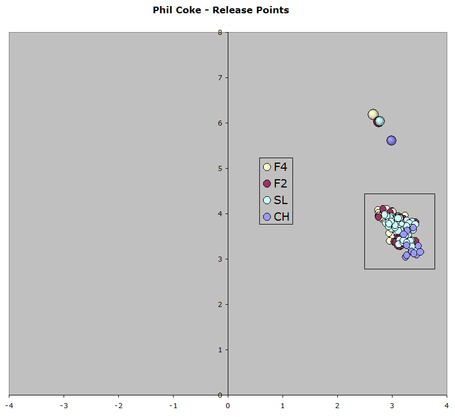 Coke only throws his change to right-handed hitters (at least in this sample), but I wonder if dropping down for that, or another pitch, would be effective against lefties. 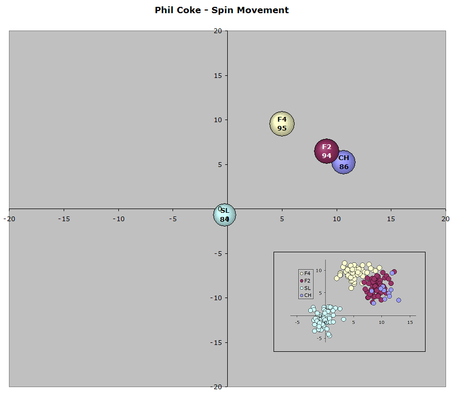 So, Coke has two distinct fastballs, which are often present, but difficult to pick out. Makes my life easier, and the analysis more precise. You can see how the change moves a lot like the sinker, but a little more.

These flight paths also highlight the release point difference, and give you a hint at plate locations. 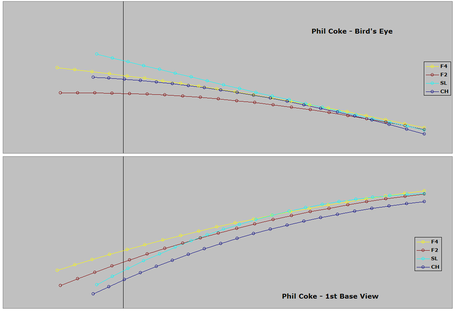 And now to the plate: 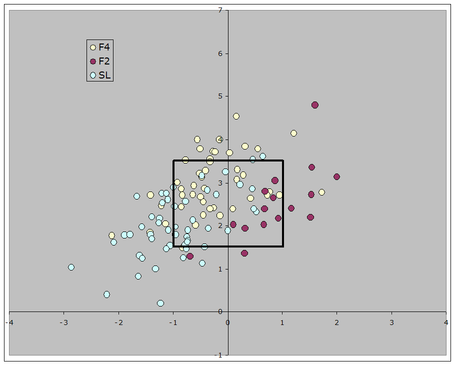 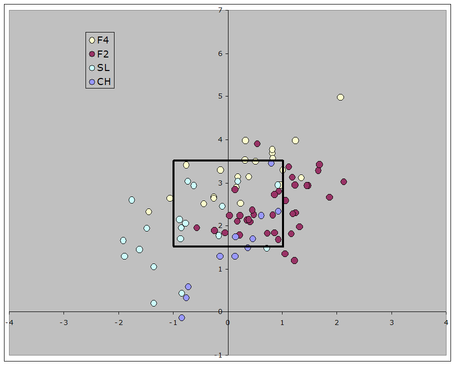 It's like each pitch has its own place, just like with the movement. Notice again the overlap of the F2 and CH.

Coke throws hard, but don't expect the same as a starter. He does have a little bit of velocity to spare, so that's good news.

That change is a big drop-off from the heaters. Notice that the two-seam sinker isn't all that much slower than his cousin, but sinks (relatively speaking) 3 inches and tails another 4. If you're a righty batter, try hitting that off the end of your bat.

Small sample alarms, but he's tough to get a piece of. Very tough. He's not throwing a whole heck of a lot of strikes, though. League average is .40 + for ISZ. He does have a pretty high paint rate - but the samples probably render that meaningless. Something to consider, though.

Let's pull back the next layer (terms and definitions can be found in some of the previous posts on this topic - click the pitchfx label for now, and I'll add a permanent home/pop-up/hover later on.)

Not very aggressive, but it seems to be working. So far, he hasn't been hit hard at all. The whiff rate on his four-seamer is very high, but the foul rate a little low. Expect those to regress at some point.

Here's a run-down on my thoughts on his stuff:

What concerns me is, in his minor league career, he did manage a 2.5 K:BB ratio, but also walked 2.95 per 9. That's not horrible, but not great. But he'll have to start attacking the zone more based on what we've seen of him so far.

Johnson's an interesting story. He was signed, not drafted, after high school, wears an insulin pump to manage his diabetes - even on the field - and spent 2007 pitching for Seibu in Japan (source). He has that wonderful "inning eater" label, but is really mediocre. Sporting a career K:BB rate of 1.6 isn't going to impress too many, especially with a 5.4 K/9.

Still, as his career progressed, he became more effective at picking up ground outs, but appears to be very unlucky with the long ball. If he can match last year's 55% ground ball rate, and knock down the 18.5% HR/FB, well, he may start getting some better results. 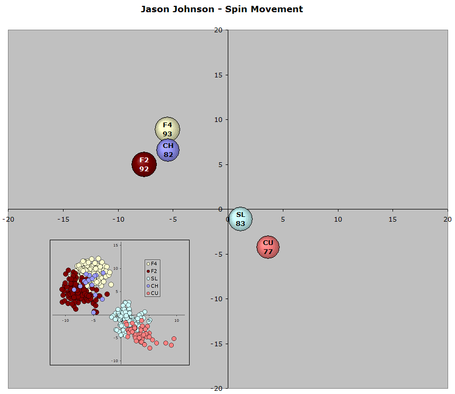 Larger sample, so more noise in the scatter plot, but you can see the distinct pair of fastballs. Note the curve doesn't have too much more spin movement than the slider.

Also, compare the change-up to Coke's - it seems to come off the four-seamer more so, in terms of the spin movement, while Coke's spun, and crossed home plate, more like his sinker. 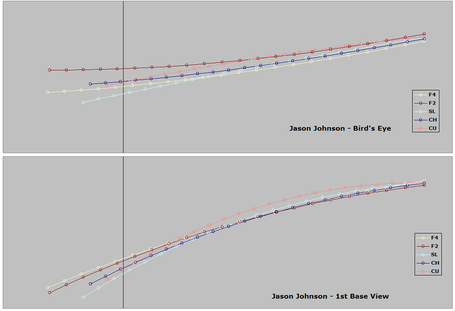 You can see the "hump" on the curveball on that side view. 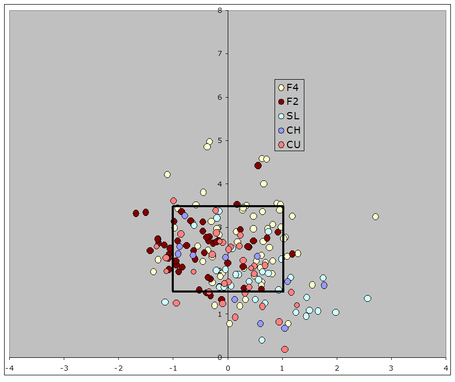 He keeps the ball down, and the slider inside. 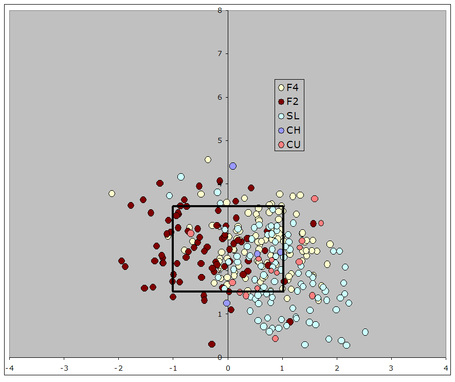 He'll give a righty the sinker inside, but really nothing else.

If you notice, the velocity I have is higher than what Fangraphs will show - that's normal - my figures are from right at, or close to, release, while your typical radar reading is about 10-15 ft. from the release.

So far, nothing impressive. The slider looks OK, and maybe the sinker.

The slider and the sinker are alright, I'll give him that. But, otherwise, he was very hittable in 2008. Most of this was in relief, too, so I'd expect him to have even more problems attempting to start, and being another year older.

All said, Johnson looks to be Mr. Replacement Level. Coke may not be the answer either, but at least he's got upside.