Share All sharing options for: What's the Fuss? #4 Chad Cordero

Tim Dierkes got a tip on Chad Cordero - seems he's going to be working out for a few clubs.

Teams known to be interested based on reports: the Angels, Mets, Cardinals, D'Backs, Rangers, and Tigers.

Cordero was a first rounder for the Expos back in 2003.  Coming out of Cal State Fullerton, Cordero was in the bigs just two months after signing.  By the end of 2007, he had moved with the franchise to DC and accumulated over 315 innings and 128 saves.

In 2008, Cordero worked out a $6.2 million contract to avoid arbitration, but only made it through 4.1 innings before his season was over.  Surgery repaired the torn labrum, but the Nats DFA'd him in October.  After refusing the assignment, Chad hit the open market.

I'll leave it to the bio-mechanics types to explain the challenges of overcoming a labrum tear, but I don't believe its simple.  Cordero will turn 27 in March, and appears to be coming back ahead of schedule.

What will be the #1 thing to look for at the work-outs?  Speed.  After his first outing of 2008, he was done.  By the time he finally was DL'd, he had lost 10 mph. Everything dropped off - fastball, slider, change. 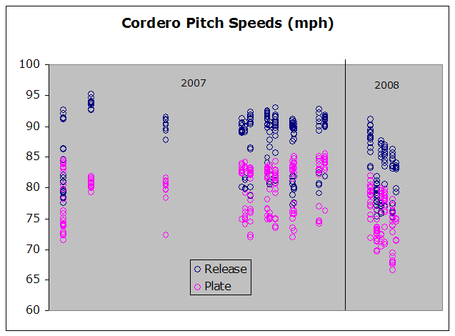 In 2007, Cordero's fastball averaged about 91 and, of the 63 sliders in PITCHf/x for that season, Cordero got a whiff rate of .333, which is good but not great.  Even with average to above-average stuff, Cordero put up good numbers, although he started showing some control problems in 2007.  He looks to be a nibbler - not a lot over the plate, and, especially, not fat either.

Marcel projects a 3.86 ERA and CHONE 3.94 for Cordero in 2009.  Both are a full run over his career mark, so they're not overly optimistic.  That works out to about a half a win, or around $2.6 million (50 innings could do it). Depending on when he comes back, and how strong he is, someone could be about to scoop him up for a big discount/small risk.